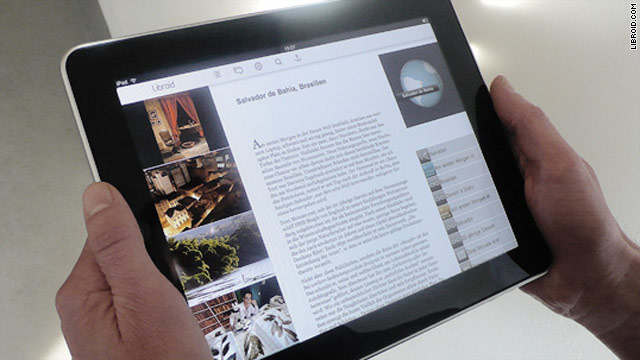 The Libroid app allows authors to add multimedia to their e-books.
STORY HIGHLIGHTS

(CNN) -- It's an age-old problem for avid book readers: You become so engrossed in a good page-turner that when the end arrives, you're still crying out for more.

But if a new creation offering books that don't end proves successful, such heartache for fiction fans could be a thing of the past.

Libroid, the brainchild of German author Juergen Neffe, is a new program that tries to reboot the e-book for the interactive age, offering readers the possibility of potentially limitless content with every publication.

And with the publishing industry in turmoil as corporate giants take fewer risks amid revenue uncertainties, Neffe hopes his product will offer a new creative outlet that could revolutionize book writing.

"I saw that what happened to the music industry is happening to the book industry and one day I woke up and said 'I don't want to drown in this,'" Neffe told CNN.

"So I started thinking about what the book of the future would be."

It's certainly a pressing question for the publishing industry. As more of the book business moves off the printed page and onto a computer screen, publishers who can corner this new market stand to win big.

Bookseller Amazon U.S. said this year it was selling 143 e-books for every 100 hard copies. According to the International Digital Publishing Forum, e-book sales in the U.S. amounted to $88.7 million in the second quarter of 2010. In the same period five years earlier they were barely $3 million.

Yet, there are concerns in this nascent marketplace.

"I think ultimately what will give e-books their point of difference to traditional books ... is this interactive element.
--Dan Waddell, bestselling author
RELATED TOPICS

Some industry experts speculate the low-cost market entry offered by e-books could pose a threat to the dominance of big-name publishers. And though authors might benefit from being able to self-publish, without the machinery of large publishing houses behind them, it's tough to stand out in a crowded landscape.

Enter Libroid, which creator Neffe -- a veteran journalist for Germany's Der Spiegel magazine and author of a best-selling book on Charles Darwin -- hopes will beat its own path to success.

Libroid delivers the book's core text in the middle of the page. Two smaller columns on either side carry the extra content. Page numbers are abandoned in favor of a percentage bar that tells readers where they are.

Interactive elements allow readers to make their own comments on virtual book clubs that can be linked up to the text. It also offers authors the possibility of updating their own work (something that U.S. author Jonathan Franzen might appreciate after the wrong draft of his latest novel was published in the UK).

With Libroid publications also allowing readers to flit between different translations of the text, Neffe said he believes the added extras, plus a lower price tag, will set it apart from standard e-books.

Though circumspect about its chances for success, he said it does have several major selling points, not least the potential to generate a new medium for fiction writers who, he says, are already lining up to try it out.

"I think ultimately what will give e-books their point of difference to traditional books -- which are still the most efficient and best design for reading and carrying literature -- is this interactive element.

"But they have to be done well, and be integral to the story; otherwise they will simply come across as annoying and pointless gimmicks."

Neffe agrees, saying although he has been bombarded by suggestions from authors, he is choosing carefully. One winning idea, he says, is the "round book."

"Round books are those with no beginning and no end. Experienced authors tell me they have problems because every linear story has centrifugal forces that try to get out from the center.

"There is a well-known author in Germany who writes crime stories. He wants to randomly mix chapters so you would be the judge in the criminal case.

"You get nine different reports from witnesses and when you shake it up, they will mix up, so you always start with different one. Every reader is having a different experience."

So, for the time being at least, there's no end in sight.