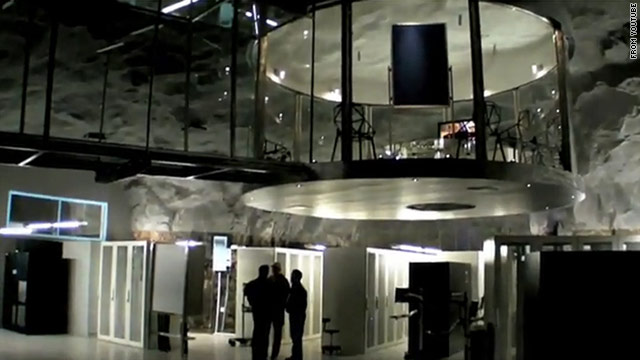 A look inside the Wiki-Cave
STORY HIGHLIGHTS
RELATED TOPICS

(CNN) -- Amazon dumped the controversial site WikiLeaks from its computer servers on Wednesday.

But WikiLeaks, which is known for publishing state secrets, apparently has found a new home for its files: A Cold War bunker, inside a Swedish mountain, that's been described as fit for a "James Bond" movie.

A company called Bahnhof is hosting the WikiLeaks site from a literal cave inside White Mountain, near Stockholm, Sweden, according to news reports from Forbes, The Associated Press, and the Norwegian news website VG Nett.

The MIT Technology Review, where we spotted this story, describes the situation this way:

"If Wikileaks founder Julian Assange is trying to turn himself into a Bond villain, he's succeeded: the ongoing distributed denial of service attack against Wikileaks has forced his minions to move the site to a fortified data center encased in a cold war-era, nuke-proof bunker encased in bedrock. Really."

Forbes has further details about the storage site:

"That data center will store Wikileaks' data 30 meters below ground inside a Cold-War-era nuclear bunker carved out of a large rock hill in downtown Stockholm. The server farm has a single entrance and is outfitted by half-meter thick metal doors and backup generators pulled from German submarines --fitting safeguards, perhaps."

There are YouTube videos about the bunker, photos on Flickr, and a page on Bahnhof's website dedicated to the White Mountain site. (You may have to translate that page from Swedish to figure it out, but there are photos there, too).

One video, from a group called Data Center Pulse, describes the center as one of the coolest on earth and "fit for a James Bond villain." A man who describes himself as Bahnhof's CEO in the video says that the inspiration for the center actually was "science fiction and James Bond movies."

Bahnhof did not immediately return phone and e-mail messages left by CNN.