What kind of beetle? This app knows 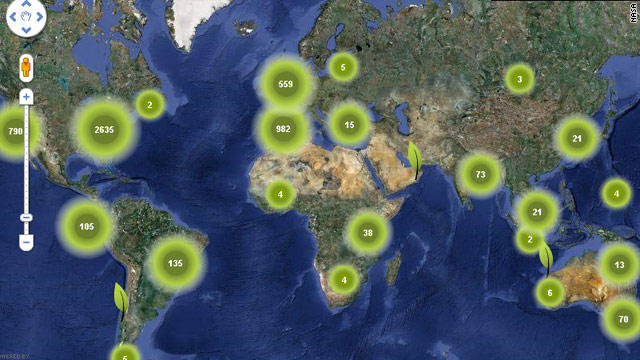 (CNN) -- Ever seen a tree and wondered if it was a maple or an oak?

Bespectacled scientists of yore would carry around hefty field guides, made up of hundreds of pages of text and photos.

But these days, smartphone owners have a lighter option: an app called Project Noah, which aims to help people identify plants and animals as well as collect data from "citizen scientists" about where certain species are located.

The app asks people to upload photos, GPS coordinates and other anecdotal info about wildlife they see. An update to the app, which will be launched in December, gives users digital badges for participating in these endeavors.

A "tadpole" badge will go out to people for submitting their first observation; experienced smartphone taxonomists can earn other badges such as one called "Nat-Geo Explorer."

Project Noah's field guides also will be tied to a person's current location once the update is live. The app is available only for the iPhone, but it will come to Android phones with an update in December.

Yasser Ansari, co-founder of a group called Networked Organisms, which first launched the app, said he hopes to mobilize a new wave of environmental awareness.

"I'm trying to bring back that wonderment; I'm trying to reignite that curiosity for the natural world that we had when we were younger," he said in a lecture at the PopTech conference, an event dedicated to new ideas in tech and social innovation.

The app also seeks to create personal connections to the natural world.

"Not only is there an educational need and an environmental need but a deep, deep human need for all of us to reconnect with our planet," Ansari said.

The free app features nature challenges, which encourage people to learn about the plants and animals near their current location.

One challenge, called "Project Squirrel," asks citizen scientists to post pictures and observations about squirrels they encounter during the day. Scientists from the University of Illinois at Chicago plan to use that data to "better understand the ecology of our neighborhoods," according to the app.

Such submissions are fed directly to the research group that's looking for them, he said, and all of the data is open, so anyone can use it. The app also shares information with the Encyclopedia of Life, an online repository of biological information.

Ansari said not all of the data that comes into the app is useful. The app relies on its community of users -- which, to date, amount to about 10,000, he said -- to flag incorrect information.

The site also integrates with reddit, the online network, to widen the net of people who are looking at the content posted from the app.

He said he hopes the Project Noah app will unite people since science groups and researchers can add their own challenges and requests for data.

He said he sees uploading photos of mushrooms and insects as its own form of activism.

"It's our planet, and it's up to us to step up and take ownership," he said. "We're not sitting around waiting for Superman or Captain Planet or any of that bulls---. The future of the planet is in our hands."