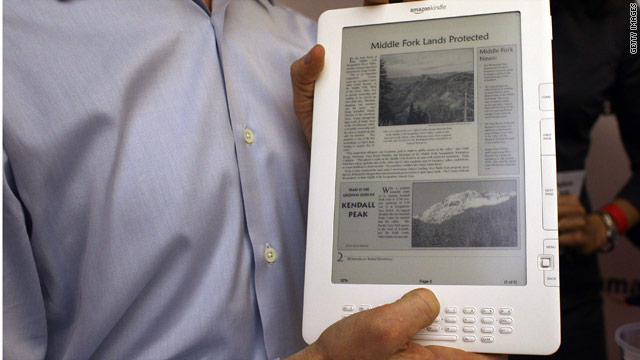 Amazon's Kindle is only capable of displaying text and images in black and white -- like the good old days of newspapers.
STORY HIGHLIGHTS
RELATED TOPICS

(CNN) -- Newspaper publishers no doubt long for the days of black-and-white packages on most doorsteps and corporate earnings "in the black," as they say.

On Monday, Amazon.com -- a new king of black and white with its market-leading Kindle e-reader -- presented them with a chance to earn more profits in the digital world.

Starting December 1, Amazon will give newspapers a 70 percent cut of revenue from digital versions of their editions sold in the site's Kindle Store. That's in line with what Apple and Google give developers selling apps in their digital markets.

Amazon announced the changes to reporters Monday. Amazon was previously giving newspaper and magazine companies about 30 percent, according to a New York Times report last year.

The online retail giant also is providing publishers with a new tool called Kindle Publishing for Periodicals. The program is designed to speed up the process of producing a version of the newspaper for the many platforms where Kindle software can be downloaded.

"A publisher would just need to send one feed, and Amazon customizes the experience for reading across different apps," Amazon spokeswoman Sarah Gelman said.

If this program is successful, Amazon could become the leading newsstand of the digital world. And if news organizations bite, it could cause a shift in their digital strategies.

Tapping the growing mobile audience has obvious appeal for traditional publishers. For example, Apple has sold more than 125 million gadgets -- iPhones, iPods and the iPad -- that run its mobile operating system. But finding developers capable of coding software for the system can be difficult and expensive.

Amazon won't disclose how many Kindles it has sold, saying only "millions." (Amazon Chief Jeff Bezos says hiding that number gives the company a strategic advantage on competitors.)

Sure, the Kindle e-reader still lacks a color display, but its software is available for an array of full-color devices, including the iPhone, iPad and those that run on Android systems. The idea is you'd have access to your newspaper subscription on every Kindle-enabled device you own. It's certainly been popular among bookworms, but that feature is not yet a reality with newspapers and magazines.

This same ubiquity strategy has helped Zinio, a mobile reading application, dominate the digital magazine market, said Jeanniey Mullen, the company's chief marketing officer. That 10-year-old business has relationships with 3,000 magazine publishers -- some of which Amazon is no doubt eyeing for its renewed push into periodicals.