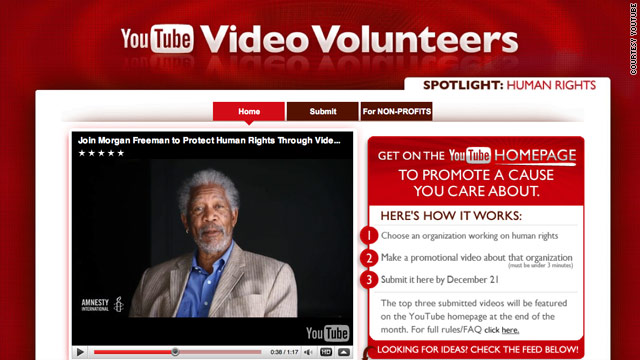 (CNN) -- The Los Angeles Regional Food Bank needed a way to tell the world about its work. Shawn Ahmed wanted to continue the video storytelling he'd begun on behalf of the poor in Bangladesh.

The result, YouTube's Video Volunteers page, pairs deserving but underfunded charities with creative video producers willing to help them. The page has brought hundreds of sometimes-offbeat fundraising and promotional videos to the same site that launched such Web celebrities as singer Susan Boyle and the "Leave Britney Alone" guy.

"There are all these really big, sexy parts of YouTube, but we need people to know about this [project] because it actually matters," said YouTube spokesman Aaron Zamost, invoking pop star Justin Timberlake.

"The nonprofits aren't that sexy -- but we're trying to bring sexy back a little bit to the nonprofits."

The Video Volunteers page lets nonprofits post descriptions of projects for which they need videos produced. Video artists, in turn, can scroll the offerings and pick a cause they'd like to help.

Since October, the site has featured a particular issue each month. February's issue is health. The best videos get featured on YouTube's main page, giving massive exposure to both the charity and the video artist.

"We would love to think users just do it out of the kindness of their own hearts," said Ramya Raghavan, the nonprofits and activism manager at YouTube, who said she thinks that's usually the case. "But I think the incentive piece does help a lot."

On average, about 75 new volunteer videos appear on the page each month. During "animal welfare month" in October, 120 new videos were created, Raghavan said.

Last year, Ahmed, who had already visited Bangladesh to video blog and raise funds for poverty relief there through his personal project, Uncultured, was looking for a way to address the issue closer to home.

He found out about the Los Angeles, California, food bank through YouTube and the charity's parent organization, Feeding America.

"It was just really serendipity," said Ahmed, who lives in Toronto, Canada. "I wanted to do something charitable at home and YouTube had made a relationship with Feeding America. This actually made things really, really easy for me."

The food bank is one of the nation's largest and distributes about 1 million pounds of food a week. Its staffers were thrilled at the prospect.

Spokeswoman Julie Flynn said the staff recognized the value of an online video presence, but never had the time or money to seriously pursue it.

"We're just trying to maintain our own Web site," she said. "It was really nice to have someone volunteer, and a cool way for [Ahmed] to get involved. It was a perfect blend of his passion, his skills and our need."

The resulting video shows Ahmed touring the bank's distribution center on a forklift, interviewing clients and, ultimately, showing the 10,000 pounds of food he was able to provide with a $2,000 donation he'd raised online.

It appeared on YouTube's main page on Thanksgiving Day, and had gotten more than 400,000 page views as of this week.

The key to success on YouTube, Ahmed said, is realizing that the site's viewers are different than a television audience and that traditional public-service announcements aren't going to cut it.

"When people watch videos on YouTube, they don't approach it the same way as when they watch CNN or 'Heroes,' " he said. "It's very personal interaction for them. I just wanted to take a personal approach ... I thought if I do it this way, people would get more involved."

Many of the clips are quirky, unconventional and self-referencing -- taking their cues from some of the most viral videos on the site.

One video titled "The World Sucks: Make It Suck Less" promotes the launch of Video Volunteers while name-dropping some of the most viral Web videos ever.

"How about we put a squirrel on water skis and we tie a banner to its neck with all the stuff that you want to say about charity?" says a guy having a video chat about the page. "Or, we take a 7-year-old kid to the dentist, we get him all hopped up on pain medications and then we have him talk about charity."

In the end, Raghavan said, the project is about giving charities -- which often struggle to make ends meet in tough economic times -- a chance to make their case to the masses.