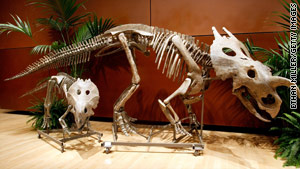 The theory that a giant asteroid killed off the dinosaurs 65 million years ago has been reaffirmed by a team of scientists.
STORY HIGHLIGHTS
RELATED TOPICS

(CNN) -- A team of scientists has agreed that a giant asteroid killed off dinosaurs and a majority of other species on Earth more than 65 million years ago.

The researchers analyzed evidence and agreed that it supports a single-impact theory first proposed 30 years ago on the cause of the mass extinction.

Since 1980, scientists have gathered an overwhelming amount of evidence that shows a single asteroid about 6 miles in diameter, traveling at around 43,000 mph, slammed into the Gulf of Mexico, said Richard Norris, a paleoceanographer at the University of California San Diego.

The impact caused a crater 24 miles deep and 125 miles wide, according to Norris, who was part of the research team.

The crater was discovered in 1991 in Chicxulub, Mexico, on the Yucatan Peninsula, said scientists who called it the "smoking gun" that backed up the asteroid theory.

Norris compared the asteroid's impact with a blast from 100 million megatons of TNT.

"It's basically more powerful than all the atomic weapons on the planet going off all at once," he said.

The researchers wanted to settle disputes about what killed off the dinosaurs. Some theories have argued that it would have taken many meteorites to cause such a cataclysmic event. Another rival theory suggested that the mass extinction was a result of a massive volcanic eruption in India that took place around the same time as the impact.

Data at the crater's location showed rock with concentrations of iridium and platinum, which are characteristic of the chemical fingerprints of the asteroid, Norris said.

Norris speculates it took about 15 million years before the planet and surviving species started recovering from the impact that also destroyed 70 percent of other species.

"It's believed that the impact actually blew down the forests over most of North America from the pressure wave associated with the explosion," Norris said.

"Then there was this fireball that came after that that fried a lot of vegetation and basically cleaned off the landscape over most of North America."

It "jiggled loose a lot of sediment on the eastern seaboard," Norris said.

The conclusion was published in the journal Science on Friday.