How to handle a cyberstalker 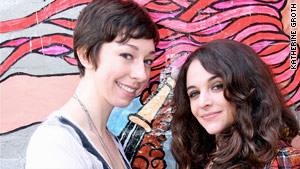 (CNN) -- Unless you're one of those internet hermits still jammin' around with a Hotmail address (How's 1997? Can you bring me back a slap bracelet?), you likely have a few of what you might teasingly call "stalkers."

How else would you explain the torrent of random acquaintances who, without fail, attack your Facebook wall with a "Happy Birthday" bomb every year?

Most of the time, such attention is just an unmerited boost of your self-rated online likability/interestingness. But depending on the enthusiasm level in the fevered fingers of your unwanted BFF, it can also be, how can we say it ... hella off-putting.

Here's what to do when someone goes from pal to parasite.

Code Blue: The friend who can't stop tweeting at ya/posting on your wall

You tweet something mundane about how you're hungry. She suggests you make a fish dish with sauteed greens and cornbread. You post a link to one of those obnoxious Mel Gibson rants (the one with the cats). She expresses her disdain with his misogynist/racist tendencies and offers to send you some "really fascinating and enriching" psychological journal articles about fame's effect on the brain -- oh, and a link on how to adopt cats. You post a photo album. She likes every single freaking picture.

Looks like you got yourself a fan -- or at least a friend who hates her job/life so much that she can't get enough of yours. Look, unless you feel a "Talented Mr. Ripley" situation breathing down your neck (in which case, skip ahead to Code Red), she's probably harmless -- even if every time she at-replies, you feel the urge to bash yourself in the head with a stapler.

Since that's not the most constructive option, we suggest an alternative: Crowd-source the hell outta her.

Let her dispense with the knowledge by asking daily questions via Twitter/Facebook, e.g., "Any book suggestions? Something aside from 'Imperial Bedrooms' and/or whatever Oprah's shilling, please." "What Android app is best for listening to cached play lists offline?" (Slacker Radio FTW, btw.) "I'm considering living a double life, what should the other half be?" She already digs getting up in your business, she might as well serve some purpose.

Code Yellow: The dude or chick who always chats you on Facebook

You're surfing along the old book of faces when that why-the-hell-would-anyone-think-this-is-OK popping noise assaults your eardrums. It's Facebook chat -- the red-headed stepchild in the family of social communication -- and, oh look, it's that dude you met at someone's loft party two months ago.

It's like he sits on Facebook all day, his fingers hovering over his paltry chat list, waiting for you to sign on to see what horrid snapshot someone just tagged you in. "Hey," he says, "What's up?" He never actually gets up the stones to ask you out, which means you've never had a chance to shoot him down, which means he still has hope, which means Facebook has become a war zone, a realm where that popping noise could strike at any time.

While you don't owe your swain some sweeping explanation ("I find your mouth-breathing IRL a major turnoff and I greatly dislike your sloping shoulders"), you needn't respond with the silent treatment.

Facebook chat has a rather kick-ass feature few know about that allows you to create lists of friends and, subsequently, sign "offline" for some lists and on for others. (Just click on "Friends lists," create a list, and click "edit" to decide who's chattable.)

Now relegate the Object of Your Non-Affection to a list labeled "oh no, oh no" and go invisible. Yeah, some people call hiding a sign of cowardliness -- maybe those people can talk to Romeo for ya.

Code Orange: A stranger who friends you

Try this scenario on for size: You're wandering life's dusty highway, ruing your lost childhood, when some guy stops you. "Hey, man. Let's be friends," he says. "Now tell me your name, introduce me to all your buds and acquaintances, let me know how you feel on a daily basis by way of Ke$ha lyrics, give me your phone number, tell me what events you will be attending, and -- hold on a sec -- all right, I just attached this GPS tracker to your ankle for good measure."

Wouldn't that freak the hell out of you? OK, so why do you accept the friend requests of strangers on Facebook?

A few years ago, it was all over the news that school administrators would go undercover and create fake student profiles, friending members of the college community as a way to sniff out underage drinking and similar unspeakable evils. At Northwestern University, "Lauren Cohn" racked up 143 friends -- none of whom knew who she was. While we're not certain the school was involved in the fabrication, that's beside the point -- 143 people just let this chick into their social circles.

Of course, Facebook privacy has only become more complicated since those simple, pastoral days, and you've probably heard about founder Mark Zuckerberg's legal issues pertaining to mismanagement of personal info. The app "Reclaim Privacy," which lets you scan for security holes, became hella useful. (Watch for an update soon.)

Still, take a gander at novelty apps like "Open Book," which allows you to search others' unprotected status updates for potentially incriminating info (I looked, and no, I would rather not know about the hot oral sex you had this a.m.), and you'll see that people are still total lost lambs when it comes to privacy. With geo-location features reportedly in the works for Facebook, we're predicting a whole lotta antacids in Zuck's future.

So if a random person sends you a request to hook up via FB, just ... don't, OK? Tell him you don't truck with people you don't know, and direct him toward your Twitter or LinkedIn. Or just ... don't respond.

Cue the after-school special jam: Cyberstalking -- real, true-blue stalking -- is actually a thing. According to statistics from the U.S. Department of Justice, stalking impacts 3.4 million people annually, and about 25 percent of victims report some use of technology -- including spyware, e-mail, identity theft or instant messaging services -- was involved.

We checked in with Michael Kaiser, executive director of the National Cyber Security Alliance. He describes cyberstalking thusly: "A course of conduct (more than one incident) that uses technology to track, intimidate, harass, threaten or scare victims." That could mean harassing you online or even using the internet to gather info that can be used for physical stalking.

If this fits your sitch to the proverbial T, start with a call to a resource like the National Center for Victims of Crime (1-800-FYI-CALL), Kaiser says. Keep all copies of e-mails, texts, voice mails, etc. and even keep a log of the stalkage. Oh, and don't respond to the creep, ever.

I mean, we usually just kick someone into the next leap year when they give us lip online, but not everyone can be netiquette women of steel, amirite?