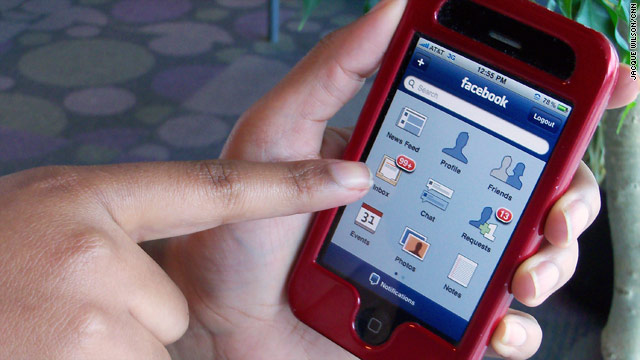 It's not clear whether users' unfavorable reactions stem from privacy concerns or just confusion about the site's Places feature, which allows users to "check in" at restaurants, bars and other gathering spots. But it may be a good thing for Facebook that the site has no "dislike" button.

"People, use common sense. Foursquare and geolocation applications only increase the chance of violent crimes and theft," wrote a commenter on CNN.com. "If I announce online that I am on vacation, I'm pretty sure that leaves my house vulnerable."

A user on Facebook's blog wrote, "I'm upset that this was enabled by default -- especially for people who are victims of stalking and harassment, it could be potentially dangerous if their location was broadcast to the world. Please change it so that this feature (especially the ability of your friends to indicate your location) is turned off."

Some comments indicate that users may not understand how the Places feature, which Facebook unveiled Wednesday night, actually works. The feature won't reveal users' locations without their prior approval, for example.

"Do some of you people know how to read? It's not going to automatically tell people where you are UNLESS YOU 'CHECK IN'," wrote a CNN.com commenter.

Such confusion is not new to Facebook's community of 500 million members.

It seems every time Facebook adds a new feature, it takes people some time to accept it and feel comfortable with it, said Justin Smith, founder of the blog Inside Facebook.

"It's a cultural thing," he said. "People need to discover what types of things are appropriate to share about their friends. ... Just like other features, I expect there will be a learning process where [users] discover what they're really comfortable with."

Three months after Facebook tightened privacy controls in response to criticism about how users' information was being shared online, the site once again faces uneasiness about privacy.

In a statement, the American Civil Liberties Union of Northern California praised Facebook for taking the privacy of its users into consideration when drafting Places. But the ACLU chapter complained that while Facebook will give users the option to display their "check-ins" to "friends only," it hasn't provided an option for users to opt out of the feature entirely.

Rainey Reitman, a spokeswoman for the Privacy Rights Clearinghouse, told CNN that people may not realize "the problems associated with geotagging" -- adding geographical identification data to online messages or photos -- until it affects them personally.

"We recommend that if you're going to use any kind of location identity social network, that you don't tell people where you live. Don't tag your own home," she said. "If you at least keep your home somewhat private, you won't be sending an open invitation to burglars."

The same advice applies to people sharing and tagging pictures on Facebook, she added.

Marc Rotenberg, executive director of the Electronic Privacy Information Center, said the issue with Facebook Places is not so much with the feature itself as the way it's being introduced -- a sentiment some commenters also have shared.

Facebook should leave it up to users to enable the feature if they want to check in at places instead of making the people who don't want to use it have to adjust their privacy settings, Rotenberg told CNN.

In its blog post, Facebook claims its Places feature will never tell people where you are if you don't choose to tell them.

One CNN.com user suggested that people could use the Facebook Places feature to keep tabs on the whereabouts of their spouses and partners.

"This will help to keep track of your [significant] other... Babe where are you? I'm at work. Prove it, check in!" the commenter wrote.

At least one commenter on Facebook's blog was tired of people griping about the site and offered a simple solution.

"OMG quit complaining about privacy. If u don't [want] people knowing about you then don't use Facebook," the user wrote.