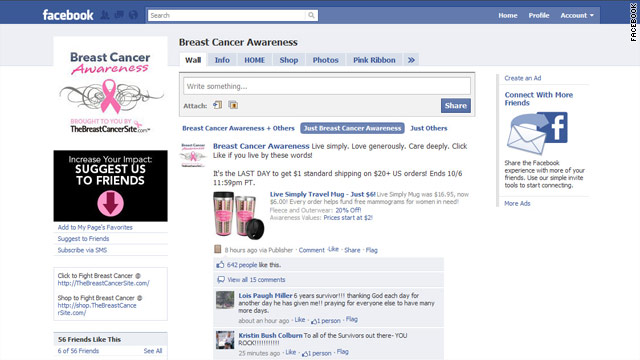 Women on Facebook are using the "I like it on ..." status as a rallying cry to raise breast cancer awareness.
STORY HIGHLIGHTS
RELATED TOPICS

(Mashable) -- If you're confused because your Facebook News Feed is filled with women saying that they "like it on" the floor or the kitchen counter, you're not alone. It's all part of a new Internet meme that has gone viral on Facebook to raise awareness for breast cancer.

First things first, though: These women are actually referring to where they like to place their purses, not to their favorite places to make love. Of course, part of the reason this meme has gone viral is due to its heavy sexual connotations.

The reason for all of these "I like it on" status updates is simple: October is Breast Cancer Awareness Month, and hundreds of thousands (if not millions) of women are using this meme as a rallying cry to raise awareness for cancer research.

The status updates naturally get their friends to ask them about their commentary, which is exactly the point of this meme.

While we don't know where the campaign originated from, it's cute, fun and generating some buzz (especially useful, as the commenters point out, for getting women to go in for their medical examinations).

Still, we can't forget that this is a disease that will kill 10 million women in the next 25 years, so we also implore you to donate to breast cancer research if you can.