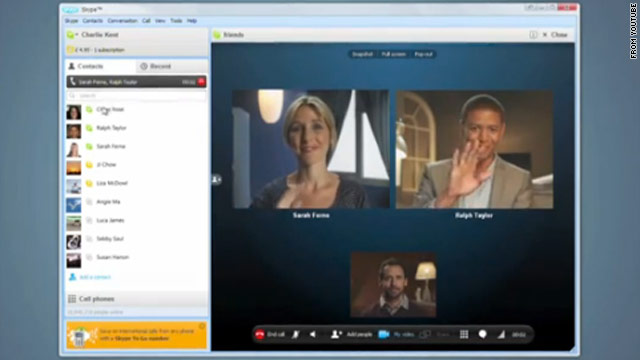 Group video chat is a new feature announced by Skype on Thursday. It will be free during beta testing.
STORY HIGHLIGHTS

(CNN) -- With Facebook integration and the ability to have group video chats, Skype is getting more social.

The site, which allows free internet voice and video calling, announced the changes in a video posted on its official blog Thursday.

The new Skype for Windows will include a Facebook tab that lets users watch their news feed as they talk. The feature will let users call their Facebook friends with a single click from the tab if those friends have a number in their Facebook phone list.

The news comes a day after Facebook announced it will be working with Microsoft-owned search engine Bing to add Facebook profiles, posts from friends and other features to search results.

"We're working with companies such as Skype to make it easy to find your friends anytime you want to connect," Facebook developer network director Ethan Beard said in a blog post.

The group video calling is available in beta form as a free trial. The blog post did not say how much the feature would cost when it comes out of beta.

Osterloh said users spend an average of 520 million minutes on Skype every day. Video calling accounted for about 40 percent of Skype-to-Skype traffic during the first half of this year, according to the blog posts.

Users also can use Skype to call land lines or mobile phones for a fee.