CollegeHumor's founder on how to be funny online 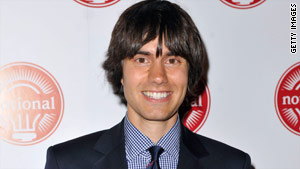 Ricky Van Veen is one of the mind's behind CollegeHumor.com.
STORY HIGHLIGHTS
RELATED TOPICS

New York (CNN) -- Trying to create the next "David After Dentist" or become the next "Numa Numa" guy?

Ricky Van Veen, one of the minds behind CollegeHumor.com, says that before you try to make a viral video there's a seemingly obvious question you should answer.

"The first thing you have to ask yourself is, 'Why would anybody watch this?' " he said. "If you can't come up with a good reason, don't make it [the video]."

Van Veen was the opening keynote speaker Tuesday at the Mashable Media Summit in New York. The daylong event, co-sponsored by the social media blog and CNN.com, is part of Internet Week New York and was scheduled to include speakers ranging from Foursquare co-founder Dennis Crowley to actor Edward Norton.

Van Veen created CollegeHumor in his dorm room at Wake Forest University in 2000 as a place for him and his friends to post videos they liked.

That website, which originally included a caveat for "old people" over 32, has become a multimillion dollar property that has spawned an MTV show and become one of the web's top comedy destinations.

Van Veen said that in contrast to television, which is largely a passive medium, successful online content has to be fast, easy to understand and eye-catching.

At CollegeHumor, editors favor two- to three-minute videos, with a "hook" coming in the first 20 seconds.

Another key to comedy gold on the web is what his team calls "candy corn" -- things that reference cultural touchstones "that everybody knows but nobody thinks about," he said.

As an example he referenced the CollegeHumor video "Font Conference," which created comic characters based on the names of the computer typefaces users have seen thousands of times but probably never really thought about.

On the other hand, Van Veen once got a press release promoting a "viral sensation" that had gotten 98 hits on YouTube. Someone also pitched an online contest urging filmmakers to submit videos about what they love most about their credit union.

At Monday's Mashable summit, Van Veen announced a CollegeHumor partnership with Pepsi to create videos for the beverage company's Sobe line of drinks.

He also teased a television project being developed by his production company, Notional. The three-word tease, which he wouldn't elaborate upon? " 'Wipeout' on methamphetamines."