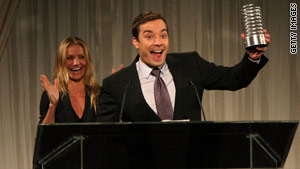 New York (CNN) -- Film critic Roger Ebert and the founder of the website Chatroulette.com were among the honorees on Monday night at the 14th annual Webby Awards in downtown Manhattan.

Ebert, who lost his ability to speak after a bout with cancer, was given the Person of the Year award for blogging and using social media tools to get his writing voice back.

"Twitter and the internet have allowed Roger to continue the work we came to know and love him for," said Jimmy Fallon, who presented Ebert's award. "I can't remember the last time I went to see a movie without seeing what Roger Ebert thought of it first."

Chatroulette's founder, 17-year-old Andrey Ternovskiy, was given the "Breakout of the Year" award.

Ternovskiy's website, which lets people chat face-to-face with strangers, has been praised by some for breaking down social and national cliques online. Others have called it a den for pornography.

"I think it's incredible that this far into the Web, something can be created by a 17-year old kid in Russia and literally all of the major global media is talking about it three days later, " he said.

"It really shows the kind of impact you can have on the internet."

Some of those who received Webby Awards expressed optimism about the future of the internet.

"You ain't seen nothing yet," Vinton Cerf, the man known as the "godfather of the internet" told a raucous crowd. Cerf, a co-inventor of the internet who is credited with writing the Web's original code, received a Lifetime Achievement Webby Award.

"The Webbies represent a kind of recognition that creativity isn't dead yet," Cerf said.

Though the event lauded the internet's ever-evolving ability to facilitate communication and openness, some spoke of the challenges that remain, particularly for traditional media outlets. "It's all going to be about who you trust, what information do you value," Huffington said.

FailBlog CEO Ben Huh attributes the success of his website, which features people's failures and comical mishaps, to the 2008 stock market plunge. "That's when celebrating failure really exploded because when things are bad, when you're down, what's better than to laugh at someone else's misery," Huh said.

The gala, hosted by the International Academy of Digital Arts and Sciences, recognized more than 100 winners in the four areas of websites, Interactive advertising and media, online film and video and mobile.