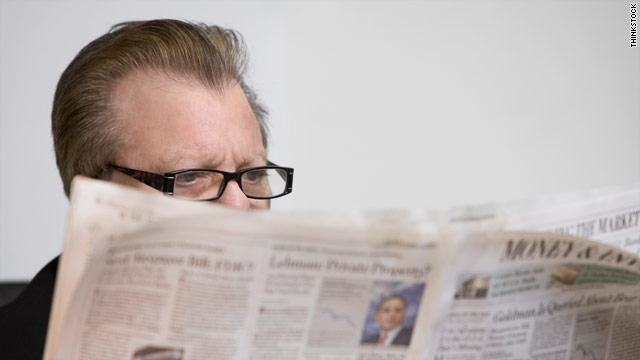 (Silicon Alley Insider) -- Newspaper companies are a dying breed, and one consistent scapegoat for their demise is the rise of blogs and online news sites.

At the same time, Rupert Murdoch sneered at bloggers, saying they would cause the "content creators" like his company News Corp., parent of the Wall Street Journal and New York Post, "to pay the ultimate price" if they were not held in check.

Blogs and other new media from Facebook to Twitter have made newspapers less relevant. If you want quicker, more focused news, blogs are a great resource. If you want more local, hyperpersonal news -- i.e., what your sister's cat did today -- then Facebook or Twitter are your best bets.

But despite factors of expediency and personalization, new media outlets are not to blame for the creeping death of newspapers. It makes for a great story to have upstart blogs destroying hidebound news organizations, but the truth is much more simple.

Advertisers are killing newspapers. Advertisers have fled newspapers for the greener, cheaper pastures of the internet and they're not coming back.

The numbers prove this out. Alan Mutter, an expert on the economics of the newspaper industry, recently reported that newspaper advertising was down about 10 percent year-over-year for the first quarter of the year. Meanwhile, advertising on the internet, radio and television were all up. Web advertising was up 7.5 percent.

Newspapers still attract more ad dollars than the web, but that is expected to change soon. PricewaterhouseCoopers' annual report on media trends reported that web advertising totaled $24.2 billion last year. The Newspaper Association of America reported $24.82 billion in advertising for 2009. By the end of this year, the web may be in front.

The expansion of advertising on the web is both good news and bad news for newspapers.

Newspapers like The New York Times have taken advantage of the web to create amazing products like interactive graphics and videos. This has helped propel their overall readership to new heights.

Millions of people visit The New York Times' website daily. That's important to keep in mind when anyone thinks of blaming blogs for the death of newspapers. There's enough people on the web to go around. Newspapers and blogs are expanding their audiences simultaneously.

As newspapers take advantage of the medium to tell stories, they'll see some of that $24 billion in online ad dollars. Unfortunately, it won't be enough to support what they do now -- and most of the money is going to the likes of Google. The New York Times online edition only generates a fraction of the revenue of the print publication. The Times is a lot less relevant as a place to advertise online than it was offline.

And no, blogs are not siphoning many dollars off The New York Times online franchise.

The Huffington Post is the most successful blog in the world, with some 12 million unique visitors a month. That traffic bests traditional news organizations like the Washington Post, The Los Angeles Times and The Wall Street Journal by a couple of million.

Yet, for all its success, revenue remains relatively elusive. HuffPo only generated $15 million last year. It hopes to double that this year to $30 million, but that's still tiny. For some perspective, The New York Times' online revenue is an estimated $150 million to $175 million annually.

If advertisers aren't spending heavily on blogs or traditional news organizations, where are they spending?

Google. The search giant has annual revenue of more than $20 billion, with the vast majority of that from web advertising.

The funny thing about Google is that it has tried to master almost every sort of business. It's investing in windmills, it's investing in mobile phones, it wants to lay cable for high speed internet connections, just to name a few. Yet, for all the businesses it has tried, there's one it says it has no interest in: print content like newspapers.

The reason? Making money on newspapers, and getting advertisers interested in spending again on print publications, has even the big brains at Google stumped.

Google CEO Eric Schmidt recently told newspaper editors, "We have a business model problem. We don't have a news problem."

We don't have a news problem, because there's enough news under the sun for newspapers and blogs to cover it all. Now, if there were only enough ad dollars.