Webcams for the voyeur in all of us 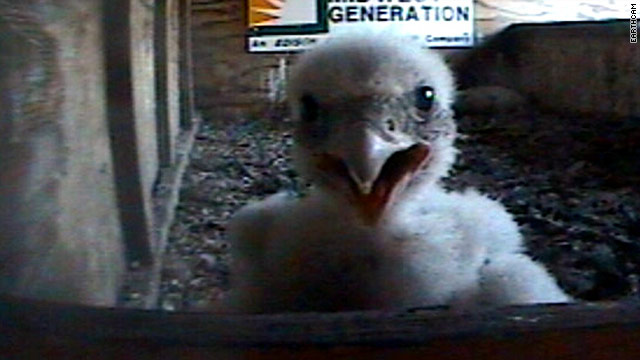 The FalconCam captured this shot on the roof of Midwest Generation's power plant in Waukegan, Illinois.
STORY HIGHLIGHTS
RELATED TOPICS

(CNN) -- Webcams are everywhere. On the beach, the surf cam is broadcasting your bikini-ready (or not) body to the world. At the amusement park, the scream cam is proving you were, in fact, scared senseless. In the bar, the look-how-much-fun-we're-having cam is showing your ex exactly how many shots of tequila it took you to get over him.

They're placed at ski resorts and at zoos. They're trained on college campuses and construction zones. They're used in restaurants, hotels and libraries. They're streaming you live, to the world, 24/7.

But you knew that.

After all, webcams are nothing new. There are now millions streaming live, compared to the 500 or so that were around in the mid-1990s. In this age of constant Facebook updates and geo-locator apps, we're used to other people knowing where we are and what we're doing. It's no longer an invasion of privacy. It's simply a cure for our eternal workday boredom.

We recently spent many hours watching webcams -- all in the name of research for this article. (You're welcome.) With help from Flemming Funch, the founder of webcam aggregate site Opentopia.com, and Brian Cury, CEO of EarthCam, we sorted through hundreds of live streams and grouped them into five basic categories. Check out our favorites from each.

When you're sitting at your desk, staring glumly out the window, your first thought is usually "I want to be anywhere but here." Welcome to travel via the webcam world. 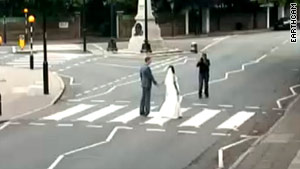 A bride and groom pose at Abbey Road in London, England.

Visit the Eiffel Tower or Times Square. Spend some time in Tokyo, Japan, or Nashville, Tennessee. Many ski resorts and beaches around the world have live streaming webcams set up so visitors can check weather conditions, but they're just as useful for dreaming of an upcoming getaway.

Two of our favorite travel cams are the new one from EarthCam at the Beatles' Abbey Road in London, England, and Yellowstone National Park's cam trained on the ever-erupting Old Faithful. As Cury says, "If we can show the world the world, it will help make it a better place."

There's nothing quite like watching a rather large Texan chew down on a massive mound of meat. At least, that's the premise of the live webcam at The Big Texan Steak Ranch in Amarillo, Texas. The restaurant's ongoing contest offers customers a full refund on their meal if they finish the shrimp cocktail, baked potato, salad, roll and, of course, the 72-oz steak. And you get to watch it all.

If seeing someone upchuck doesn't seem like your idea of a good time, check out the webcams at some other local restaurants like Prejean's in Lafayette, Louisiana, or The Salty Dog Café in Hilton Head, South Carolina. "We do it for the entertainment value of our guests," Salty Dog's marketing vice president Mark Yarbrough said. "People just like to rub it in that they're at the beach."

Boo! I see you

Ghosts can be sneaky. They're most commonly found in dark, cobwebby locations that not many people are willing to spend the night in. So what better way to catch them -- and record the evidence -- than with a webcam?

Spotting elusive creatures is one of the most popular uses of live streams. You can watch for ghosts in the Paris Catacombs or on the Gettysburg battlefield. You can prove Elvis is still alive at Graceland. Even the Loch Ness Monster has his very own paparazzi.

One of our favorites is the Willard Library ghost cam site. The Evansville, Indiana, staff teamed up with the local paper to place six webcams throughout the library. All stream 24/7 in order to catch the library's world-famous "Grey Lady."

Awwwww, look at the puppies/pandas/parakeets 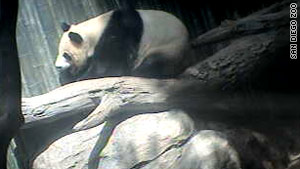 A panda glances up only for a moment during a mid-afternoon nap at the San Diego Zoo.

The San Diego Zoo's Panda Cam is easily one of the cutest things we've ever seen -- even though the big balls of fur do little more than sleep and munch on bamboo.

The pandas are trumped only by the Puppy Bowl, a live streaming event that happens once a year during the Super Bowl for fans of the smaller, less aggressive breed. Watching a bunch of panting pups chase after some soft balls on a mock football field is really something to cheer about.

The land-locked among us can also check out any number of aquarium cams, from people's personal fish tanks to the otter habitat at the Georgia Aquarium.

Web cams for the easily amused

If you're really, really bored, feel free to watch any of the cams we've grouped under the scientific term "random."

If watching paint dry would be more interesting than your current job, there's the Peeling Paint webcam. Or play with Andie and Mike's Bubble Cam -- it lets you control the bubble machine on their back patio by clicking on the site. Want something really exciting? Join the 1 million other people who have watched grass grow in this Colorado neighborhood.

"One of my favorites appeared to be mounted on an underground digging machine in Japan. We never figured out exactly where it was and what it was digging but it was very interesting," Funch said. He's always surprised by what the search engines on Opentopia can find. But it's no surprise why they're so popular. "People are curious. There's an element of mystery and of discovery."

Let's be honest, webcams have us all logged in to our inner voyeur. And while we felt a bit dirty after Googling "great webcam" at work, it was a fun way to spend a day catching up with the world... one strange live stream at a time.