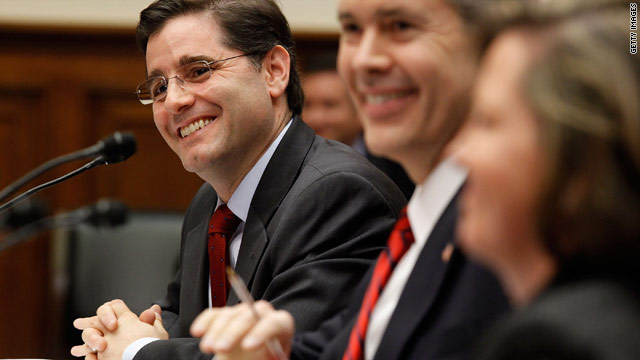 (WIRED) -- FCC chairman Julius Genachowski now finds himself caught between unfulfilled promises made to the tech community to keep the internet open, and a Republican Congress ready to portray any new rules on broadband ISPs as heavy-handed, economy-killing regulation.

Genachowski said Wednesday that the rules are coming. He didn't say how -- the $64,000 question -- but only that the FCC is being slow in order to be careful.

Genachowski, a former tech executive for IAC, was clearly at home speaking to top Silicon Valley executives at the Web 2.0 Summit in San Francisco.

He made it plain to his audience that he wanted to keep the net as a platform for "innovation" -- meaning online companies should be able to build businesses without having to ask permission from the telecoms to do so.

But his use of the word "investment" is a signal to the telecoms that he's thinking of them as well. They are fighting to stave off regulation from the FCC, saying they will hurt the companies financially, ultimately reducing how much tech infrastructure they build.

The telecoms argue that competition will keep them playing fairly, even as all of them fight to find ways to be more than just a utility company -- building out app stores, Comcast buying NBC, and wireless companies offering TV services on their networks.

Genachowski made clear he wasn't too happy when Google and Verizon announced a net neutrality policy proposal in the spring. The companies released that controversial proposal at same time the FCC was trying to forge a compromise with industry players behind closed doors, effectively ending the FCC's effort.

"I would have preferred if they didn't do exactly what they did when they did it," Genachowski said. "It had the effect of slowing down some processes."

Genachowski defended the FCC's actions over the last 22 months, and sought to downplay likely confrontations with the new Congress.

"Things shouldn't change because the kinds of issues we work on aren't partisan," Genachowski said. He named the plan to have an incentive auction get broadcasters to auction off the spectrum they have to make it available for mobile broadband, and transforming the $8 billion Universal Service Fund to help people get broadband, not just phone services.

Unfortunately for the chairman, net neutrality does include some partisan elements, and as Wired.com's Sam Gustin wrote yesterday, the FCC is already being warned by the likely heads of a powerful House committee that it should not act unilaterally to impose rules on wireless and wireline ISPs.

Genachowski, who worked at the agency in the early 1990s when mobile broadband and internet policy was just being set and mobile phones were as heavy and big as bricks, said in the long view, the FCC is facing great problems.

"These are exactly the issues we hoped we'd be dealing with in the future," Genachowski said.

"The biggest issues involve the opportunities of wireless, mobile broadband and whether we have the spectrum we need. In our wildest dreams we hoped the country might have to deal with problem like that."