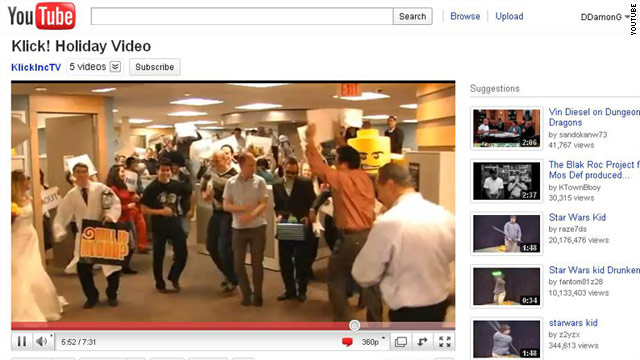 (CNN) -- How many videos go viral per year? From Bed Intruder

to Annoying Orange, there's an insane amount of memes we've run with in 2010.

And a new video attempts to cram them and dozens of other viral ideas into one video.

Called the Klick! Holiday Party, the seven-minute clip, from ad agency Klick!, is a mock festive event in its cubicle-laden offices.

What we get are dozens of employees dressed up like their favorite memes, dancing to The Isley Brothers' classic "Shout."

The video is an almost continuous shot, but more impressive is the sheer number of memes it hits. Klick! claims more than 50 are referenced, including:

I caught about three dozen, but there were a few I didn't even recognize -- and I wrote a book on the history of memes.

The video is both brilliant and overwhelming, and it will probably make you eager to hunt down the viral ideas you haven't caught yet.