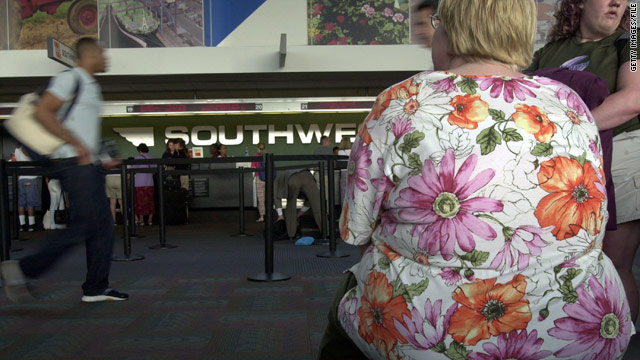 The weight issue has been a delicate one for airlines trying to respond to concerns from both sides.
STORY HIGHLIGHTS

(CNN) -- When film director Kevin Smith was recently kicked off a flight because of his size, he focused his anger on Southwest, but the incident put the spotlight on all airlines and their heavy passenger policies.

Smith said that he had no trouble buckling his seat belt and lowering his armrests on the flight Saturday and that his neighbors didn't complain about him invading their space.

He said he suspected he may have been bumped by an airline employee who did not like his films.

Southwest has apologized to Smith -- twice -- but said he was not singled out to be removed.

"Our employees made the decision to remove Kevin after a quick judgment call that he might have needed more than one seat for his comfort and those seated next to him," wrote Linda Rutherford, Southwest's vice president of communications and strategic outreach, on the airline's blog.

On his blog, Smith countered that all he wanted Southwest to do was admit that he wasn't "too fat to fly" and that the incident "was all an unfortunate error" on the airline's part. He expressed frustration that Southwest had not done so.

A related CNN.com story has generated thousands of comments from readers passionate about both sides of the issue.

"This whole thing has gotten so ridiculous. Southwest and all of the other airlines need to make bigger seats. Kevin Smith and the rest of America has become bigger and bigger, the airlines need to accommodate that, plain and simple," wrote one poster.

But another summed up the frustration of other air travelers.

"I did the fly-up-on-Monday-fly-home-on Friday thing for three years straight and nothing struck fear into the hearts of my fellow fliers more than seeing a ridiculously large person lumbering down the aisle as we were all boarding. Kudos to the airline for standing up for its passengers," the poster wrote.

Who makes the decision?

The weight issue has been a delicate one for airlines trying to respond to concerns from both large passengers and those feeling crushed while sitting next to them.

"It's embarrassing -- airlines don't want to touch this with a 20-foot pole," said Rick Seaney, CEO of Farecompare.com, an airfare comparison shopping site. "[But] this is only going to get worse."

A third of Americans are now classified as obese, according to the Journal of the American Medical Association, but the width of a coach airplane seat has changed little, remaining between 17 and 18 inches in most commercial planes.

The Federal Aviation Administration does not regulate seat width, but it does require passengers be able to sit belted and with both armrests down to comply with safety standards.

Ultimately, it is up to each airline to decide which passengers are too big to safely fly in one seat, said Brandon Macsata, executive director of the Association for Airline Passenger Rights. That means a gate agent, flight attendant or pilot can make that determination.

Macsata called the current guidelines arbitrary and said they are often unfair to women because they are typically larger in the hips, while men are often larger in the belly or in the chest.

He also urged people frustrated with fat passengers -- the term preferred by his organization -- to direct their anger at the airlines instead.

"We're crammed in like sardines, you don't have to be a fat person to be uncomfortable sitting in those seats."

A simple remedy would be for airlines to retrofit the first row of each plane with seats that are a bit roomier and reserve them for large fliers, who would pay more for booking them, Macsata said.

Airlines have adopted various policies to cope with the issue. Some are easier to find than others.

Southwest Airlines, for example, refunds the cost of an additional seat to "customers of size" after travel is completed if the flight doesn't oversell. Southwest did not return phone calls asking for the number of people who have taken advantage of the refund policy.

Farecompare.com's Seaney said there is little incentive for people to buy two seats. Many would rather pay for one ticket and take their chances that vacant seats will be available on their flight, rather than spend double and wait for a refund, he added.

United Airlines last year implemented a policy that requires obese passengers to buy a second seat, unless vacant seats are available on their flight -- in which case they would be seated next to one for free.

American Airlines has a similar policy and encourages customers to address their seating needs when booking their flight.

JetBlue does not have a policy in place for customers who require an additional seat, but the airline addresses their needs on a case-by-case basis, spokeswoman Alison Croyle said in a statement.

"We understand this is a sensitive issue," Croyle said. "If we can accommodate larger customers on the plane, we will do so at no additional charge."

Delta did not return phone calls asking for details on its policy.

A few weeks ago, Air France announced that starting this month, it would refund the cost of a second coach seat purchased by heavier passengers if the economy cabin was not fully booked.

Still, industry observers said formal guidelines should be adopted to avoid incidents like the one involving Kevin Smith. Flight attendants, gate agents and pilots shouldn't be made to act as "judges and juries" on weight issues, Seaney said.

CNN's Alan Duke and Stephanie Chen contributed to this report.