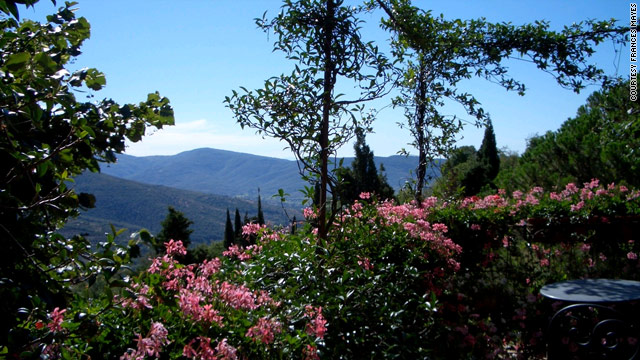 The view from the terrace of Bramasole, the country house that author Frances Mayes bought and restored in Tuscany.
STORY HIGHLIGHTS
RELATED TOPICS

(CNN) -- Many authors can move readers with their words, but Frances Mayes has the power to actually make readers move.

As in pack up and start a new life thousands of miles away in Tuscany -- the enchanting northwest region of Italy known for its food, wine and scenic beauty -- just as she did 20 years ago.

Mayes chronicled her decision to buy and restore a villa near the town of Cortona in "Under the Tuscan Sun," which became a best-selling book and the basis for the 2003 movie of the same name starring Diane Lane.

The story inspired some fans to do much more than go out for an Italian meal. About 20 expats have bought homes near Mayes' beloved country house, Bramasole, after reading about her experiences, Mayes said.

"I heard from somebody yesterday who said, 'I just read your books and I've never been to Tuscany, but I'm now planning to move there.' And I thought, oh no, please, don't blame me if it doesn't work out," Mayes said with a laugh.

Her new book might tempt some more would-be Tuscans.

In "Every Day in Tuscany: Seasons of an Italian Life," Mayes describes enjoying the bounty of her garden, buying a new house, going on trips to the resort town of Portofino, seeing Castello Brown (the castle where "Enchanted April" was filmed), tasting wine and eating fabulous food -- oh, the food. Everything from duck breast with caramelized spices and artichokes to steamed chocolate cake with vanilla sauce. The book contains 25 recipes of some of the dishes Mayes likes to cook. 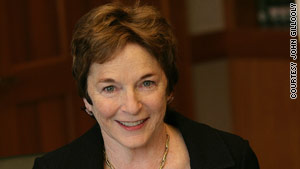 Author Frances Mayes spends up to six months in Tuscany every year. She also lives in North Carolina.

She recently talked about her life in Tuscany with CNN.com from North Carolina, where she lives part of the year. The following is an edited version of that interview.

CNN: You get a very warm feeling reading your book. It's all about friends, trips, wine and food. Is there any other place on earth where you have experienced this magic atmosphere beyond Tuscany?

Frances Mayes: In a word, no. I find that other countries have this or this, but Italy is the only one that has it all for me. The culture, the cuisine, the people, the landscape, the history. Just everything to me comes together there.

I do find some similarities among the people with the people I grew up with in Georgia in the South. There is that shared hospitality and sense of everything happening at the table.

CNN: Can you explain the magic of Tuscany?

Mayes: The initial thing is the landscape. It's largely man-made in a way because over the centuries, it's been farmed so much. So those terraced hills of olive trees and the punctuation points of the cypress and the wonderful silhouettes of the hill towns -- all those things are imposed upon a landscape that is already beautiful.

The second thing is, people really respond to the Italians. In our town, even though partly because of my books we've had a lot of tourists there in the past 10 years, somebody who comes there can still make great contact with the local people.

If you break down in your car and knock on a door, you're going to be invited in for lunch if it's time for lunch.

The third thing would have to be that the Renaissance did happen there and there's so much art. Every little town, no matter how small, will have its treasure, and that sense of connection with art is so profoundly nourishing to the spirit, you don't even know that you lack it until you go there and you feel the beauty of the architecture.

And then there's just this big old Mediterranean sun -- the weather is kind of glorious and benign, and everything just kind of comes together.

CNN: Nature is a very important part of your Tuscan life -- you talk about flowers, strawberries, cherries and your vegetable garden. Can you explain?

Mayes: If you've got a plot the size of a car or a tiny yard in Italy, you're going to be growing tomatoes and basil and celery and carrots, and everybody is still connected to the land. When we have guests from Rome or Milan, very sophisticated people, it's not 20 minutes before they're out looking at the olive trees and asking about the garden.

There's this sense that you go to the land for your food, there's still that old primitive connection there which culminates in the olive harvest [in the fall].

And that is a magnificent time to go to Italy, because everyone is out picking their olives and celebrating this end-of-the-year ritual.

At the end of the harvest, in many towns, and certainly in ours, people gather in the piazza, and everyone's got their new oil, and the baker brings out bread, and everybody is tasting the oil together, and it's just another one of those amazing ways people come together over a natural thing like olives.

Try one of her favorite recipes: Baked pasta with sausage and four cheeses

CNN: Do you like to explore other parts of Italy?

Mayes: It is still endless to me. I feel like we haven't seen anything yet, it's just a place where it will never run out on you. There's always a new town with a new dialect and a different pasta and a different Renaissance artist. It's an infinitely various place.

I adore going to the south and Sicily and Sardinia. I've never been to the Aeolian Islands, and I'd love to go there.

Venice, the most touristy place in the world, is still just completely magic to me.

CNN: You write that you admire the Italian quality of taking great satisfaction in the everyday. Can you explain?

Mayes: The Italians have their priorities right: They're driven, they do their work, but they really enjoy the day-to-day and they don't put off the enjoyment of the everyday for some future goal. There's an immediacy there.

Every day centers for me mostly in the piazza, and this is pretty much true all over Italy. Everyone goes to the piazza every day. So people aren't on their computers all the time e-mailing each other, because they're going to see each other in a half an hour in the piazza.

I've loved reconnecting with that sense of community. You walk down the street, the people who own the shops are standing in the doorways, and you chat and you hear the news and you walk home.

CNN: You're sort of an ambassador of Tuscany now. Would you ever move there permanently?

Mayes: We live there about five months a year, sometimes six. My husband would move there in a moment, but I like living here just as well. I like my American life [in North Carolina], I like going to bookstores and seeing my friends. I'm an American, so I would not like permanently to decamp to another country. But I feel lucky to have two cultures because it's interesting the way they bounce off each other for us.

CNN: For someone visiting Tuscany for the first time who has a week or two, where would you advise them to go?

Mayes: I would definitely start in Florence, because that's were the center of the Renaissance was and it's still one of the most beautiful cities in the world. You could stay there for a lifetime and not learn everything about Florence.

I would stay about three days in Florence, then I would probably travel an hour and go to Siena. After that, I would stay in the Tuscan countryside -- Pienza, Montepulciano, Cortona -- some small town for a couple of days. And it would be great to get over to the coast for a couple of days, maybe stop in Lucca and go down anywhere along the coast.

CNN: What's a good time of year to go?

Mayes: For the first time, if you can, spring or fall, because those are glorious seasons and not as crowded as summer. But any time is good, really. I love traveling in the winter.

CNN: Any advice to American visitors?

Mayes: If you learn 10 words of Italian, you can go a long way because Italians love to talk. If you just really make an effort to interact with people, they will be so responsive, and I think language is always the key to that.

Just going there with the attitude of "I can meet some great people" would be the best way to go.

CNN: Do you feel Italian?

Mayes: Oh no, I wish I could, but no, I don't. I'm kind of a quiet person, and I feel like there, I have become a lot less reserved and I certainly gesture with my hands a lot more than I used to.

And I know that I've absorbed a lot of their attitudes and ways of being, but I still feel first of all Southern and second of all American.

CNN: What is your next project?

Mayes: I'm working on a cookbook, which is just a fun project, but I'm going to be writing a Southern memoir, a book about growing up in the South and then coming back to the South to live many years later.

After that, I think I would like to try to write a novel, but I don't know, I always get these big travel urges, so I might like to do something else in the travel world.

CNN: Where else do you like to travel beyond Italy?

Mayes: Most recently, Poland. I had a great time there, and it was just an eye-opener to be in that country. I love all of South America, I want to see a lot more of it. I love to go to France, and Turkey is one of my very favorite places.

I want to go to India and Egypt -- there are so many places I haven't been.