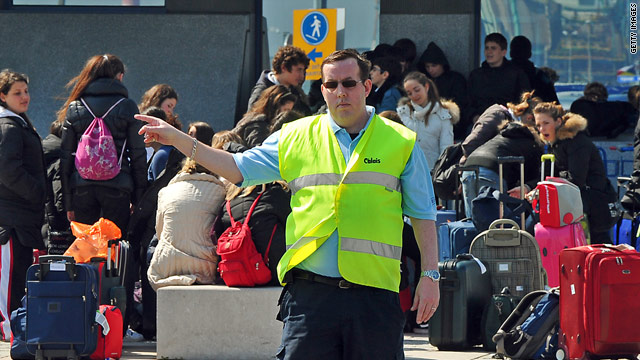 -- Spain closed 11 airports in the north, the country's first closure of airports due to the cloud of volcanic ash, the government airport authority AENA said. The airport in the capital Madrid remains open.

The airports will be closed at least until 4 p.m. local time (10 a.m. ET) on Sunday. Two more Spanish airports -- at Palma de Mallorca and Menorca -- might close later on Sunday.

More than 1,200 flights between Spain and northern Europe are being canceled Sunday.

-- Germany, Finland, Sweden and Denmark all extended the closure of their airspace, their national aviation authorities said.

There will be no flights in or out of Finnish airports before 6 p.m. local time (11 a.m. ET) on Monday.

There will be no flights in Danish airspace before 2 a.m. local time on Monday (8 p.m. Sunday night ET).

Video: From Warsaw to London with no plane

Video: Stranded by volcano? What can you do?

-- KLM Royal Dutch Airlines carried out a test flight Saturday evening in the Netherlands airspace and found that the air quality in the atmosphere met the requirements for safe flight, said Peter Hartman, president & CEO.

The airline used a Boeing 737-800 that flew to 41,000 feet (altitude of approximately 13 kilometers), which is the maximum altitude for that type of aircraft.

KLM expects to receive the final results of the technical inspection Sunday morning. If the results hold, the airline will ask for permission to resume its operations.

-- Flight restrictions for the United Kingdom will remain in place until at least 7 p.m. Sunday (2 p.m. ET), the National Air Traffic Services said.

-- All British Airways short-haul flights Sunday into and out of London's Heathrow and Gatwick airports have been canceled, the British Foreign Office said. Airport operating company BAA warned "passengers not to travel to its airports -- Heathrow, Stansted, Southampton, Edinburgh, Glasgow and Aberdeen."

-- European air traffic control officials expected about 5,000 flights to take place Saturday in European air space, a drop from a normal day of about 22,000, according to Eurocontrol, the region's air traffic authority. On Friday, there were 10,400 flights compared with the customary 28,000.

-- Approximately 600 trans-Atlantic flights take place each day, 300 in each direction. Of the 300 flights that would usually arrive in Europe, 73 flights arrived in Europe on Saturday morning.

-- The Icelandic volcano was still erupting Saturday, according to an official with Iceland's Department of Civil Protection and Emergency Management. He said it's not clear when the eruption will end.

-- Irish budget carrier Ryanair canceled all flights to northern European destinations and Milan, Italy, until Monday because of the volcanic ash, the airline said.