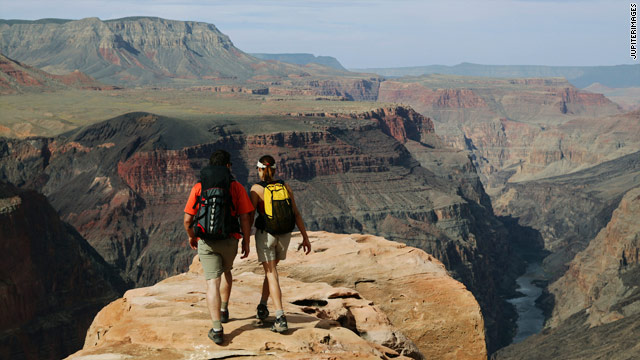 Visitors explore the Grand Canyon in Arizona. Tourism is a multi-billion dollar industry in the state.
STORY HIGHLIGHTS
RELATED TOPICS

(CNN) -- Millions of visitors flock to Arizona each year to relax in beautiful places like the Grand Canyon, Lake Havasu and the resort town of Sedona, but a political storm is threatening to impact the state's tourism.

Anger in the wake of a new state law -- which requires Arizona police to determine whether people are in the United States legally if there is a reason to suspect they aren't -- has prompted some to call for a boycott of its hospitality industry.

"Our members are concerned," said Debbie Johnson, president and CEO of the Arizona Hotel & Lodging Association, which represents hundreds of hotels, bed and breakfasts and resorts in the state.

"They're hearing from a lot of folks who visit and they're obviously concerned with where this is playing out."

The fallout started last week when the bill was signed into law.

Rep. Raúl M. Grijalva, D-Arizona, began asking organizations to stop scheduling conventions and conferences in the state until it reversed its decision. Conventions are a large source of visitors and revenue and targeting them is the most effective way to make the point, Grijalva said in a statement.

Three conferences have been canceled so far, Johnson said. They include a gathering of the American Immigration Lawyers Association, which was scheduled for this fall.

"I think to punish the tourism industry and the hundreds of thousands of families that depend on it for their livelihoods is unfair when we weren't involved in the development of this legislation," Johnson said.

In California, San Francisco City Attorney Dennis Herrerra called for an end of all business with the state of Arizona, CNN affiliate KTVU reported.

"It is similar to an effort 20 years ago when Arizona refused to acknowledge the Martin Luther King, Jr. holiday," Herrerra said, according to the station. (Arizona did not vote in favor of recognizing the holiday until 1992.)

Buzz is also growing online, where opponents of the new law have set up several Facebook pages urging people to stay away from the state.

Meanwhile, a "Boycott Arizona!" petition on ThePetitionSite.com has received hundreds of comments of support from people identifying themselves as residents of states as far away as Michigan, New Jersey and Illinois.

"I am an avid birder who spends thousands annually in the Chiricahua Mountains. I will go to Texas now as an alternative," wrote a poster who identified himself as Edwin Glenn of Vermont.

Other states are watching the controversy and offering up their facilities for visitors who want to bypass Arizona.

"As a city, New York may well benefit from another state undermining its own international competitiveness -- we're happy to have those businesses and tourists come here," Bloomberg said on Friday.

Tourism is a lucrative industry in Arizona. The state hosted more than 37 million domestic and international visitors in 2008, according to the Arizona Office of Tourism.

The tourists spent $18.5 billion and generated $1.4 billion in local and state tax revenues in 2008, the last full year for which statistics were available.

It's no wonder that Arizona tourism officials are taking steps to head off a possible boycott.

The Arizona Hotel & Lodging Association has set up its own Facebook page titled "Don't Boycott AZ Tourism," which urges visitors not to scapegoat the tourist industry and its workers.

"We just want to remind people that there's a human face to this issue and it's the workers at these resorts, hotels and restaurants throughout Arizona," Johnson said.

"We understand the emotions, we feel them too. But let's not hurt all these innocent employees who had nothing to do with it."