By Julie Clothier for CNN 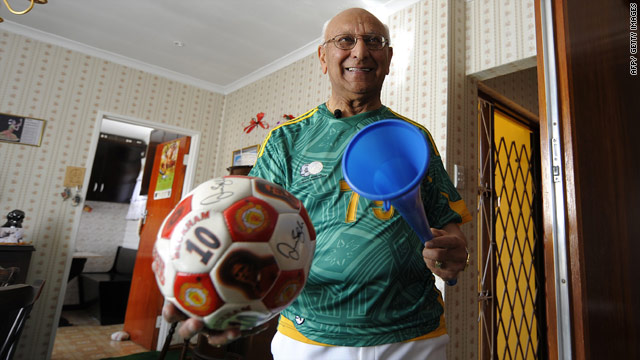 (CNN) -- When the 2010 FIFA World Cup kicks off on Friday, 18,000 specially trained volunteers will be on hand to help South Africa host football's biggest competition.

Almost 68,000 people from 170 countries applied to be volunteers at the huge event, with the application deadline closing more than 10 months ago.

Applicants were screened and then interviewed before the number was whittled down to 18,000 earlier this year.

The oldest volunteer is 79-year-old Daya Amrit, from Nelson Mandela Bay, who even missed his 60th wedding anniversary to take part in volunteer training.

Most major sporting events favor volunteers from their own patch because local knowledge is invaluable during big tournaments. But some events are on such a large scale that overseas nationals are also welcome to apply.

Years of planning goes into major sporting events so, if you are thinking of volunteering, decide well in advance.

With preparations for this year's event well underway, football enthusiasts will now have to wait until Brazil next hosts the next world cup in 2014 if they wish to volunteer.

In the meantime, here are eight up-and-coming sporting events looking for volunteers.

I've met so many people from all walks of life. I just did it because I am a pensioner, I have time, and I am a community-orientated people's person.
--Daya Amrit, volunteer for the 2010 FIFA World Cup
RELATED TOPICS

Golfing enthusiasts could do worse than spending a week of their time helping at the U.S. Open Championship. This year it runs from June 14-20, 2010.

Thousands of volunteers serve as marshals, assist with scoring and give information to spectators. Volunteers at most major sporting events are given their uniform for free but at the U.S. Open you must pay around $165.

The upside is you get a pass allowing you to enter the venue for free for the duration of the tournament even when you are not working.

All volunteer positions for 2010 are full so for information to help you start thinking about 2011's Open, click here for background on what is required.

Multi-lingual volunteers can help communication with athletes, journalism students can assist with press operations and those with a current driver's licence and clean record can transport athletes to and from venues.

If you missed out this time around, you will need to wait for the next one, to be held in Zurich, Switzerland in 2014, as volunteer slots for Barcelona are now filled. Click here for information on how Barcelona ran its volunteer selection process.

Singapore will host the first ever Youth Olympic Games from August 14-26, 2010.

The city-state has sought applications from volunteers based both home and abroad. Both school and tertiary students make up a huge chunk of volunteers for this event, but non-students with a strong knowledge of particular sports are also helping out.

Nanjing in China will host the second Youth Olympic Games in 2014. Information about the volunteering process in Singapore is available here.

Each year at the U.S. Open, many volunteers assist with various activities during the event from working at the U.S. Tennis Association membership booth to the ticket exchange booth. This year the event is being held from August 30 to September 12. Click here for more information.

The Indian capital hosts the Commonwealth Games from October 3-14, 2010 in what will be the biggest sporting event ever held in India.

A whopping 30,000 volunteers will be on hand to help 8,000 athletes from 72 Commonwealth countries competing in 17 sports.

The next Commonwealth Games will be held in Glasgow, Scotland in 2014. For more information on Delhi volunteers, click here or here.

The 16th Asian Games, also known as the XVI Asiad, to be held in Guangzhou, China from November 12-27, 2010. It will be the largest Asian Games with 42 sports to be contested by athletes from 45 countries.

More than 14,000 athletes, technical officials and coaches will be in the southern China city for the games. The organizing committee has already had applications from close to 700,000 volunteer-hopefuls for around 500,000 places in the city and 60,000 working at sports venues.

Applicants need to apply before July 31 and two-thirds of those who have already applied are students. Details are online, where you will be asked to select a category based on interests, hobbies and background.

Applicants will be chosen for their English language skills, general knowledge, professional skills and emotional strength.

The Rugby World Cup, the world's third biggest sporting event after the Olympics and football World Cup, will be held at stadiums throughout New Zealand from the weekend starting 10 September, 2011.

It will be played over seven weekends with the final being held on October 23, 2011.

Around 70,000 visitors from overseas are expected to travel to New Zealand during this time and the government is looking for 5,000 New Zealanders to help at airports and at the 13 centers where games will be held. For details visit the New Zealand government website or the official world cup ruby website.

When London won its bid to host the 2012 Olympic Games in July 2007, thousands of people registered to become volunteers at the event.

The good news is, the London organizing committee needs some 70,000 helping hands for the event in two years time and is still calling for applicants for the July 27- August 12, 2012 event. For more information, click here.