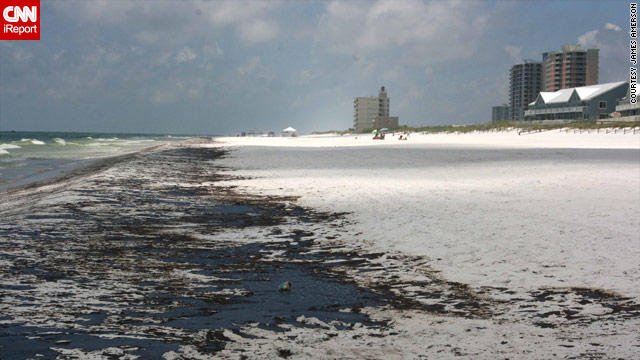 Pensacola, Florida (CNN) -- When you're on vacation or live in a coastal community, it's a symbol you simply don't want to see: a no-swimming sign, along with a beach health advisory.

More than two months after the Deepwater Horizon disaster, Pensacola awoke Wednesday to the largest onslaught of black crude on Florida's coast, as more than nine miles of white shoreline and beaches were soaked with syrupy oil.

A health advisory has been issued by Escambia County for parts of Pensacola Beach and Fort Pickens.

"It's pretty ugly. There's no question about it," Florida Gov. Charlie Crist said. "It does break your heart."

iReport: Oil pouring in with surf by dump truck loads

Surrounded by hundreds of BP cleanup workers wearing protective suits in the sweltering heat, Crist toured the area by helicopter and on foot, and he thanked workers for their efforts.

"Its like Jimmy Buffett said, we don't want to take the 'sky is falling' attitude about this," he said of the musician and coastal activist.

Oil also washed up on nearby Perdido Key, where workers cleaned up 8 tons of tar balls.

Offshore, several shrimp boat skimmers could be seen fairly close to shore, near the Pier at Casino Beach.

"There's more skimmers coming in to be able to keep it offshore, so I'm hoping they will be able to go ahead and continue that robust effort offshore so that we only see very little onshore."

But to continue the fight against oil, Florida's Gulf counties say they need money, and they say BP isn't returning phone calls. County representatives are meeting Wednesday with the U.S. Coast Guard and BP to make sure the checks get in the mail.