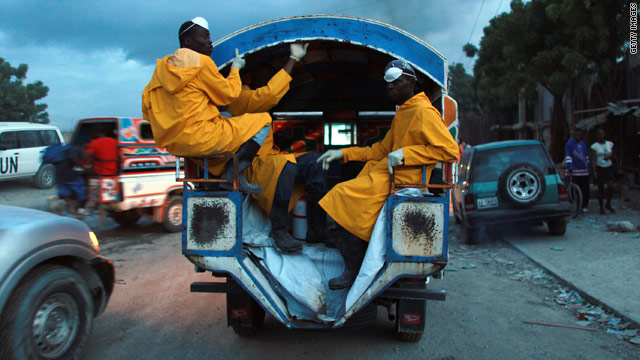 (CNN) -- Cholera has arrived in the Dominican Republic, and it has caused fear and worry. But experts say tourists planning on visiting the country's famous beaches should not cancel their trips.

The bacterial intestinal disease has already killed more than 1,100 people in neighboring Haiti and hospitalized more than 18,000 others. Dominican officials said Tuesday the first case has been detected in their nation -- a 32-year-old Haitian construction worker who returned Friday to the Dominican Republic from a visit to his homeland.

It may sound counter-intuitive, but the cholera case in the Dominican Republic may even create an atmosphere of precaution that could benefit tourists.

"It's a good time to travel to the Dominican Republic because the health department has likely enhanced sanitation," said

Dr. Eugene Gangarosa, a professor emeritus at the Rollins School of Public Health at Emory University in Atlanta.

Tourism is a major industry in the Dominican Republic, and the nation is one of the top destinations in the Caribbean for North American and European tourists.

According to data provided by the Caribbean countries, the Dominican Republic is the second-most popular Caribbean destination for American tourists, only behind Cancun. More than 900,000 Americans have visited the island through August of this year. For Canadians, too, the country is the number two destination in the region, behind Cuba. It ranks number one for Europeans, with more than 800,000 visitors through August.

The alarm that is spreading in the Dominican Republic may affect those tourism numbers, but from a public health perspective, really shouldn't.

"Generally speaking, tourists are more aware of personal hygiene and sanitation and the importance of avoiding contaminated water," he said. Tourists are not generally affected by cholera in the countries they visit, he said.

Eric Munro, Southern California president of the Caribbean Tourism Organization, said that like anywhere else, traveling to the Dominican Republic has its risks.

"Traveler beware," he said, but added, "There is no concern at the present time."

Rioters cause havoc in Haitian city

It was expected that the cholera outbreak in Haiti would cross the border into the Dominican Republic, but his organization has checked with local health officials who say the risk to tourists is minimal.

He recommended that anyone traveling there to make sure they have health and travel insurance in case of emergency. Also, travelers with other conditions that may make them more susceptible to cholera or other illnesses, like whooping cough, should check with their doctor before traveling, Munro said.

Although the lone reported case is the result of a migrant bringing the disease into the country and is not related to local water or food contamination, many Dominicans are still worried.

"Yes, yes. Of course," said Yehenny Rodriguez, a private security guard who lives in Santo Domingo, the nation's capital. "There's much worry in the country. This is a strong disease that people get easily.

"Everybody's talking about it."

Officials in the Dominican Republic, which already has a strained public health system, have issued a maximum health alert.

The disease, which can cause deadly diarrhea and vomiting, is contracted by ingesting contaminated food or water. Dominicans are being urged to wash their hands often and to be careful about what they eat and drink.

All forms of media -- television, radio, newspapers, social networks -- are being employed to get the word out, said Madera.

"The most important thing is that the population be advised," Madera said.

Rodriguez said Wednesday he is taking that advice seriously -- washing his hands often and not eating any food that wasn't prepared at home, especially street food. Many others are following the same practice, he told CNN.

The World Health Organization rates the Dominican Republic's health system as the 51st most efficient among 191 countries. That ranking places it in a lower position than the United Kingdom (No. 18) and the United States (No. 37), but higher than South Korea (No. 58) and Mexico (No. 61).

Madera, who spent two weeks treating patients in Haiti after January's deadly earthquake, is confident that the Dominican health system can handle an outbreak -- up to a certain point.

"We have sufficient medicine and medical institutions that can handle cases that may come up -- for now," he said Wednesday.

And Dominican authorities, he said, are taking a proactive approach.

Efforts are being made to investigate passengers who were on the same bus in which the ill Haitian traveled to the Dominican Republic last week. Also, he said, all reported cases of diarrhea are being investigated.

The Dominican Republic Ministry of Public Health is receiving help in contingency planning and and implementation from the U.S. Agency for International Development and the Centers for Disease Control and Prevention, said Todd Haskell, spokesman for the USAID office in Santo Domingo.

The CDC also is assisting the public health ministry in establishing laboratory testing for cholera, Haskell told CNN in an e-mail.

Both agencies started offering their assistance October 22, the spokesman said.

Despite Madera's confidence that the Dominican Republic can handle an outbreak, he said, "it can reach a reach a point where it can overtake a nation's capacity to treat it."

Should that occur, he said, a public state of emergency would be declared and private physicians and health institutions would be called upon to join the battle.

For now, he said, the situation is under control.

The ill patient, identified as Wilmo Louwes, was hospitalized and immediately isolated in the town of Higuey, near the eastern resort city of Punta Cana.

A widespread cholera outbreak could prove devastating for the Dominican Republic if tourists decide to stay away, because the Caribbean island nation relies heavily on tourism. In 2004, for example, the nation of 9 million inhabitants had 4.2 million tourists, the Central Bank and the Ministry of Tourism reported. Of those tourists, more than 4.2 million came by air and more than 455,000 were cruise ship passengers.

The services sector of the economy, which includes tourism, employs about 64 percent of the workforce and contributes 55 percent of the gross domestic product, the measure of the nation's services and products.