The bar at the end of the world 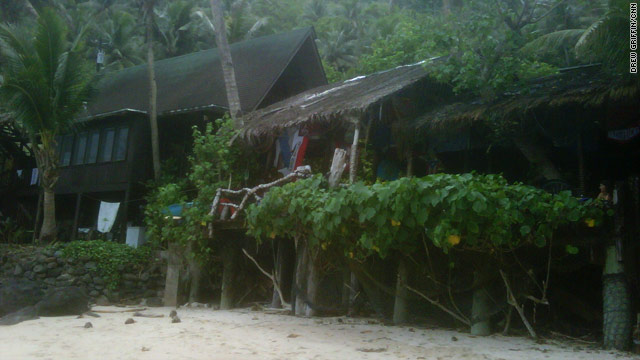 CNN correspondent Drew Griffin, producer David Fitzpatrick and photojournalist Jeff King traveled to American Samoa to report on a tsunami warning system that was never built. While there, they sampled the local cuisine.

American Samoa (CNN) -- Tisa's Barefoot Bar is not so much an actual bar as it is a collection of driftwood fashioned together into a beachfront oasis. And like the driftwood, patrons drift in to Tisa's and cling to its confines, because on American Samoa, there really is nowhere else to go.

American Samoa, a five-hour flight south of Honolulu, Hawaii, has just a few hotels, no real resorts and only one golf course. It is not a tourist destination.

But if you find yourself here, like I did, caught between the two flights a week provided by Hawaiian Air, I wholeheartedly recommend spending time at Tisa's.

Tisa is the owner. She is also the cook, tour guide, political consultant and history teacher. She once ran for governor of the territory, a place where men still dominate most aspects of life. And within seconds of your arrival, you realize Tisa takes hosting pretty seriously.

The entrance is marked by a broken surfboard, flipped to one side when "open" or the other when "closed." I had to peek at the other side, by the way, because Tisa's seems to always be open.

You can sit at the barstools cut from coconut palm stumps or grab a casual plastic table and chairs and stare at the roaring surf, breaking about a hundred yards offshore. A wandering Kiwi bartender was quick to take our order for a couple of bottles of Vailima, the local brew. And a few minutes later, both the cold beer and Tisa arrived at our table.

The beers were placed down, and Tisa sat down. We spent the better part of the afternoon chatting politics, drinking beer and making subtle, then not-so-subtle, references to how hungry we were. Tisa finally got the hint.

There are no menus. The owner gives you what she is cooking. She returned with a delicious local meal of grilled chicken, Asian cole slaw and a taro and plantain dish covered in coconut cream (freshly squeezed coconut). All of it was artistically arranged on a banana leaf plate, served in a palm frond basket.

Twilight was now beginning to fall, large fruit bats soared overhead, and we realized we had been at Tisa's for hours. Time just seems to pass by at this bar at the end of the world, which is a good thing, because on American Samoa, there's nowhere else to go.

From Honolulu, catch the Thursday or Sunday Hawaiian Air flight south to Pago Pago, American Samoa. Tisa's is about a 10-minute drive south of the capital on a (sometimes) two-lane road that hugs the coastline. Look for Tisa's on your right, but park on the left, where a shoulder has been carved out of the mountain.

Three chicken dinners and, well, an ample amount of beer was about $70. Tisa let us use her snorkel gear for free.