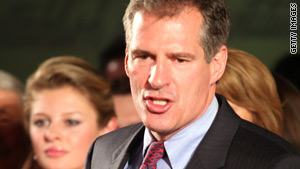 Massachusetts Republican Scott Brown was elected to the U.S. Senate on Tuesday.

(CNN) -- Scott Brown
The Republican Senator-elect handed President Obama the first defeat of his presidency. After trailing by double digits a little more than a week ago, yesterday Brown beat Democrat Martha Coakley in the race to fill the late Ted Kennedy's Senate seat. No Republican had won a U.S. Senate race in Massachusetts since 1972. Brown, a 50-year-old state senator, campaigned as the pickup truck-driving candidate, capitalizing on voter frustrations and vowing to send Obama's health care bill "back to its drawing board." The GOP win in Tuesday's special election means that Democrats have lost their 60-seat, filibuster-proof majority in the Senate, jeopardizing much of Obama's agenda, including health care reform. "He's branded himself brilliantly. He has run as the people's senator," said Jennifer Donahue, a political analyst and contributor to The Huffington Post. Brown, a lieutenant colonial in the Massachusetts National Guard, is well-prepared for life in Washington. As a 22-year-old law student at Boston College, he won Cosmopolitan magazine's "America's Sexiest Man" contest, appearing nude in the June 1982 issue. A Cosmo Web columnist wrote, "Compared to some men in the GOP, this politician looks pretty damn good for his age." A Washington Post headline dubbed Brown "Sen. Beefcake."

Barack Obama
President Obama launched his presidency before an estimated 1.5 million people on the National Mall one year ago today with somber yet confident tones, saying the country will overcome its serious economic and international challenges. "Today I say to you that the challenges we face are real," Obama said in his January 20, 2009, inaugural address. "They are serious, and they are many. They will not be met easily or in a short span of time. But know this, America: They will be met." Among the serious challenges: a crippling recession, millions of people out of work, fighting terrorism at home and abroad, immigration reform and passing health care legislation. According to a CNN Poll of Polls, Obama's approval rating when he took office was 65 percent. Today, it's 51 percent.

Sarah Wallace
The 24-year-old midwife from Canada moved to Jacmel, Haiti, in 2008 with the hopes of building a maternity center and orphanage. The Edmonton Journal reports that the port city of 40,000 people is a shambles and Wallace has been sleeping outside, distributing food or driving injured people to get medical help. In emails to the Canadian newspaper, she has been describing her experiences: "Broken houses; people sitting outside their homes waiting for the word that it's all over; people hysterically crying because of lost ones; dead people on the street or in the backs of trucks," she says. "I have asked if the U.N. has organized anything for children who have lost their parents, but nothing has been set up yet. I think all orphaned children are probably still in the care of neighbors, relatives or strangers." After two visits to Haiti as a teenager, Wallace decided to rent a house with money she had earned as a golf course maintenance worker in Canada and with funds that friends and family had sent her. At the house, she taught "traditional Haitian midwives skills to give babies born in their care a better chance." Wallace also registered a charity in Haiti called Olive Tree Projects.

Edmonton Journal: Midwife says quake is a reason to stay in Haiti

Tim Tebow
Focus on the Family has announced that it has purchased its first Super Bowl ad to air February 7 during CBS Sports' coverage. According to the organization's Web site, the commercial will feature Tebow, a University of Florida football player and Heisman Trophy winner, and his mother, Pam, sharing "a personal story centered on the theme of Celebrate Family, Celebrate Life." Pam Tebow was pregnant in 1987 and became sick during a mission trip to the Philippines. She ignored doctors' recommendation to abort her fifth child and gave birth to Tim, who grew up to become one of the nation's most-beloved college football players. TNS Media Intelligence reports that a 30-second spot during the Super Bowl costs between $2.5 million and $2.8 million. Jim Daly, president and CEO of Focus on the Family, said the funds came from "very generous and committed friends" who donated specifically to support the project.

Larry Platt
A 62-year-old's rhythmic fashion review has become the Internet's first viral sensation of the new decade. "Pants on the Ground," an atonal and repetitive condemnation of baggy jeans by "General" Larry Platt of Atlanta, Georgia, capped last Wednesday's episode of "American Idol." In less than a week, the performance has hit the two magic millions of online fame -- more than 1 million fans on Facebook and 1 million-plus views on YouTube. Way more than 1 million views, in fact. As of Tuesday afternoon, several versions of "Pants on the Ground" had together tallied somewhere around 5 million clicks on YouTube. The most popular had more than 1.8 million views, and another had about 1.5 million. The military veteran said there are plans to record the song -- which consists mostly of the lyrics -- "Pants on the ground, pants on the ground, Looking like a fool with your pants on the ground."