Seven years of war and an eternity of remembrance 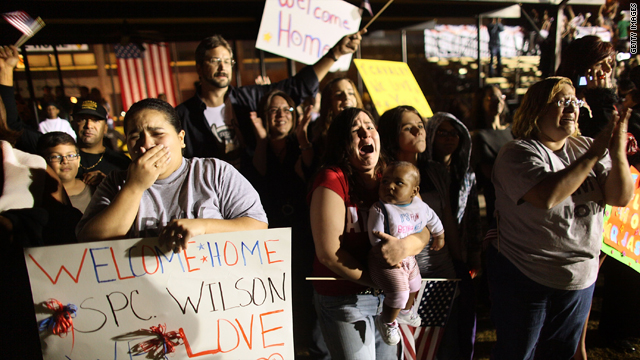 Entering its seventh year, the Iraq war elicits a range of emotions: from grief and pain to relief and pride. Last November, families wait for their loved ones with the U.S. Army 1st Cavalry Division to arrive home.
STORY HIGHLIGHTS
RELATED TOPICS

(CNN) -- The Iraq war, about to enter its eighth year, came home most recently to Federal Way, Washington, a tiny town outside Seattle where 26-year-old Pfc. Erin L. McLyman lived. Her body was flown back to the United States this week; her parents comforted by memories and the courage of a young daughter felled in combat.

Too many American families have endured stinging loss since the United States began waging war on Saddam Hussein's Iraq in March 2003. Seven years of bloodshed have taken the lives of more than 4,000 American men and women in uniform. Thousands more returned maimed, disfigured, unable to cope.

On the home front, the Iraq war has many front lines filled with victories and defeats. For America's military families, this is a war marked by seven years of time and an eternity of remembrance.

As the focus shifts to the other war in Afghanistan and a U.S. pullout from Iraq comes into view, those who paid a price ponder a conflict without a neat ending.

Some weigh political gain against personal loss. Some imagine their lives as if there'd never been a war, or they attempt to mask the ultrathin veneer of daily routines. Others swell with pride or argue that their sacrifices will prove their worth.

"I truly believe I have assisted in making this world a better place for the people of Iraq and in turn for my own 10-year-old daughter Allie," he said in an e-mail Wednesday from Baghdad.

Ward, 43, was critically injured in one of the first instances of a makeshift bomb in eastern Baghdad. That explosion in June 2003 drove shrapnel through Ward's left foot and detached his right arm from the elbow.

After 22 surgeries and a full year in a hospital, Ward wanted to return to Iraq to see the job through.

And so he did, as the operations officer for the United States Division-Center, which oversees partnering with Iraqi security forces in Baghdad and western Anbar Province.

He is encouraged to see Iraqi pride restored and government institutions begin to flourish. Most recently, he was thrilled that Iraqis turned out to vote in elections unmarred by fraud or major violence.

"They now see the possibility of the people determining the course for the country, and I think they are ready to assume this task," Ward says.

Others who were critically injured in Iraq have more mixed feelings.

Shrapnel shattered the left side of Nicholas Boutin's face and head, sending him on a lifelong journey of survival: Traumatic brain injury, the signature injury of the Iraq war, has no cure, only treatment.

Boutin, 26, learned to live with the sight of one eye. He taught himself to speak again, to read. He admits that he has a difficult time articulating his thoughts.

"I'm almost like the way I was back then, except my memory," he said. He married a woman who stuck by him. They are expecting a daughter in June and hope to start a new life in Charleston, South Carolina.

At times, Iraq feels like a dream to Boutin. Other times, he thinks of it as a place where so many young Americans lost their innocence.

"Sometimes, I am happy I went. Sometimes I'm not," he said. "I did something for my country."

It was that same love of country that drew Scott Kirkpatrick into the infantry. After the terrorist attacks of September 11, he felt that he had to do all he could to uphold the ideals of America. His mother, Marti, 57, opposed the war; his father, Ed, 58, was willing to believe there was cause.

On his second tour, Kirkpatrick's unit was part of the 2007 surge of U.S. troops. He died that August in a booby-trapped house in rural Arab Jabour, southeast of Baghdad.

Remember the fallen: U.S. and coalition casualties in Iraq

Since that day, Ed and Marti Kirkpatrick of Dickerson, Maryland, have wrestled with opinion and emotion.

Marti, an artist, wants to believe that her son's life was not wasted. She seeks solace in knowing he had thought things through. Ed, a photographer, says it's never easy to think that your child died in vain. The Iraq war, to him, has been about defending the hard-won freedoms Americans enjoy.

While the terrorist attacks led Scott Kirpatrick to think deeply about his role in war, Karie Fugett was still in high school -- a 15-year-old preoccupied with teenage problems -- when hijacked planes crashed into the World Trade Center towers and the Pentagon.

Five years later, she was married to a Marine. They'd barely begun life together when he was deployed to Iraq in March 2006. Days later, a bomb took her husband's leg. Their's became a relationship defined by hospitals, drugs, caregiving -- and pain.

Fugett, 24, says her husband's personality changed. He became angry, irritable. He suffered from post-traumatic stress disorder. She gave up college to take care of him. They moved to Birmingham, Alabama, where she now works as a matchmaker for a dating service. She is desperately trying not to fall behind on her bills. She even pawned her wedding ring.

Fugett doesn't tune into the news much. She only knows one thing about Iraq: The war destroyed her life. Every day is about survival now.

So has Robert Stokely, of Newnan, Georgia. Stokely, 57, still clicks onto Google Earth to find Yusufiyah, the Iraqi town where his son Michael Stokely died in August 2005. That Yusufiyah is now patrolled by Iraqi security forces is a sign, he believes, that his eldest son helped accomplish something.

A fear had festered within Robert Stokely from the day Michael joined the Army National Guard: He had a feeling he would never see his son again once he went off to war. That fear, he says, has now turned to hope that Iraq will stand on its own one day.

If he could, he'd tell the Iraqi people that his son went to war to do something good for them. That Michael's death did not end his family's goodwill. "We still want to help," he said.

But even for a staunch defender of the Iraq war, the loss of a child is a lot to bear. Stokely navigates life, every day keeping his son's things (a dog tag, a rock from Iraq) close to him, every day reminding himself that his son performed his constitutional duty.

At a military support conference, Stokely was asked a question that he fields often from strangers: Was the war worth it?

He pulled out an unused pair of tiny diapers that he bought almost three decades ago when Michael was born prematurely. He waved the preemie diapers in the air and answered the question like he always does. "I would point to Mike Stokely. He gave his life."

In Iraq, Robert Stokely figures, it was time for his family to bear sacrifice for America.