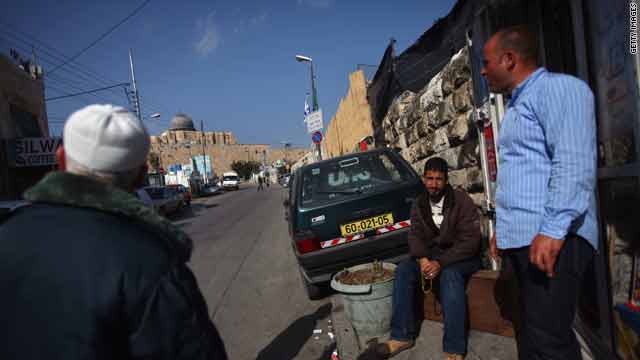 Palestinian men gather near the "City of David" Jewish settlement on March 2 in the East Jerusalem neighborhood of Silwan.
STORY HIGHLIGHTS

The mayor of Jerusalem visited Washington this week with a tough stance on the future of his city and indicated the freeze on construction in east Jerusalem that the United States demanded of Israel is not going to happen.

Over dinner with a group of reporters, organized by the pro-Israel group The Israel Project, Mayor Nir Barkat denied any freeze in construction in his city and said he could never accept Palestinian control of any part of Jerusalem.

In the hours leading up to the meeting, reports were coming out of Jerusalem quoting local officials as saying a de facto freeze in Jewish construction was in place in the predominantly Arab eastern part of the city. Israeli Prime Minister Benjamin Netanyahu, the officials said, had effectively halted new construction in an effort to ease tensions with the Obama administration and jump-start the stalled peace process.

"There is no freeze. It's not true," Barkat said. There was a slowdown, he acknowledged, after Israelis were shocked by harsh criticism from the United States for allowing some new construction in east Jerusalem.

"Israelis felt slapped in the face," he said. "It takes some time for to recover from such an attack from a friend like the U.S. administration."

The Obama administration hasn't exactly been quiet about its pressure on Israel to halt settlement construction and boost the chances for peace talks. Nevertheless, Barkat said, Israelis have rebounded from the "slap" and now it's "business as usual," with district commissions that oversee housing approvals in Jerusalem starting to meet after a brief hiatus.

But, he said of the Americans, "if they are recommending a freeze, the answer is no. You cannot stop a vibrant and living city like Jerusalem from growing."

He was equally as firm against east Jerusalem becoming the capital of a future Palestinian state. In fact, he said, he is opposed to giving Palestinians national or municipal authority over any portion of Jerusalem, warning that "giving Arabs any grip in the city is a Trojan horse for Jews."

Israel, he said, must have sovereignty over a united Jerusalem. He did, however, say he had no problem with a Palestinian embassy in the city when they get a state.

Barkat unveiled his long-term plan for Jerusalem's growth, which he said has remained unchanged for 10 years despite political realities. He predicts the city's population would grow from 800,000 to 1 million in 10 years but keep the 65-to-35 ratio between Jewish and Palestinian residents. His master plan calls for more homes for Jews and Arabs in east Jerusalem and will not change, he said.

He also spoke of improving the economy of Jerusalem, which he said has become Israel's poorest city. Currently, the city draws about 2 million tourists a year, but Barkat has a goal of bringing 10 million a year within the next decade.

Barkat said he had shown his plan to U.S. officials, who had shown little objection. He tried to meet with senior State Department leadership this week in Washington to discuss the construction plans but was told that scheduling issues made that impossible. He did have some lower-level meetings at the State Department, though.

His comments could inflame Palestinians and broader Arab opinion at a delicate moment. The U.S. Mideast envoy, George Mitchell, just returned from the region and is due to return next week in the hopes of getting "proximity talks" started. Both Israelis and Palestinians have expressed a willingness to return to the negotiating table. But with construction in Jerusalem one of the key sticking points preventing that, a sudden announcement about one of Barkat's plans could throw water on those talks.