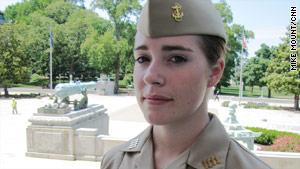 U.S. Naval Academy Midshipman Marquette Ried will train to be one of the first women to serve on submarines.

Annapolis, Maryland (CNN) -- For 11 women soon to graduate from the U.S. Naval Academy, the school's bucolic grounds and these warm, sun-washed spring days are about to give way to another world: preparing for life undersea, as the first women to serve on U.S. Navy submarines.

It is difficult to think of a career more arduous than that of a submariner in the U.S. Navy: weeks spent in a high-stress environment, cramped quarters in a craft submerged hundreds of feet below the surface, very few places to go to decompress.

Add to that the fact that, as their ships slip under water on their first cruises, this elite group will be making history as the first officers of their gender assigned to what has long been the all-male community of the submarine fleet.

But they say breaking a gender barrier is far from their minds. Trained to be leaders and endure the sacrifices that come with that, they say they are focused on the bigger picture.

"I am not doing this to be a trailblazer," says Marquette Ried of Fort Collins, Colorado. The words come out as easily as the wide smile she gives when she talks about life after graduation from the Naval Academy this month.

"I see us being just like our male counterparts, and I think we'll be accepted the same way," Ried says.

The Navy's submarine fleet has always been manned by elite crews with top scientific and tactical minds who are able to thrive in a pressure-cooker environment for long periods of time.

It is a tight community, and those who cannot meet the standards are booted out; those who make it often rise through the ranks and enjoy successful and prosperous careers.

For the history of the modern U.S. Navy, the "silent service," as submarine duty is nicknamed, has been off limits to women for numerous reasons.

Publicly, the argument has been based on space. There is very little room on the vessel to accommodate separate facilities for men and women. In private, many will tell you women don't belong in such an atmosphere, they can't cut it, and they would be a distraction to male sailors.

The change is the most significant for women in the Navy since 1994, when the service first let them serve on ships. The arguments were similar then.

On Thursday the Naval Academy showed off the service's future, the first class of female submariners.

Don't bother telling these graduating seniors the arguments. They know all about what people have been saying, and that has not changed their minds.

The professionalism of the force is going to rise to the challenges of this new integration.
--Laura Martindale, U.S. Naval Academy midshipman

Eleven of the nearly 200 women in the academy's class of 2010 volunteered for submarine training. All 11 were evaluated and interviewed, as were their male counterparts, and all 11 were told last week they were accepted into the program.

"I think it's important that we go into this knowing that we will be imposing a little bit of change on the sailors," says Abigail Gesecki.

"Small spaces and other issues might cause some snags, but the professionalism of the force is going to rise to the challenges of this new integration," she says.

These women are among the best of the best the class of 2010 has to offer. The 11 women are among the 138 seniors from the academy chosen to enter the submarine training program. To be selected for this career path, a midshipman must demonstrate an ability to absorb and understand technical sciences as well as be at the top of her game academically.

About 20 female seniors in all will be chosen for the submarine program from 2010 graduating classes at schools across the country. They will come from the Naval Academy, the collegiate Reserves Officer Training Corps programs, and officer candidate schools, according to Navy officials.

Last fall, Elizabeth Hudson of Plymouth, Massachusetts, began her senior year at the academy with her mind set on joining the Marine Corps upon graduation.

Her poise and bearing are those of an experienced military officer, and it does not take long to pick up on the spirit she carries that would serve her well as a future Marine.

But that is not to be.

Hudson, a systems engineering major, heard about the Navy's policy change last October, began thinking about what the Navy was looking for, and knew she was qualified.

"I thought of it as my responsibility to volunteer. I didn't know if it was going to come to fruition ... and it was more of, 'Here is an opportunity,' and I thought I had some of the requisite skills," Hudson says.

But when asked why she switched from the Marine Corps to the sub service, she says there is not much of a difference between the two.

"Both are small services, have a sense of camaraderie, extensive and highly specialized training and the sense that you are the best, or most elite in your mission," she says.

"Obviously one is more physically demanding and one is more intellectually demanding, but here at the Naval Academy our motto is 'morally, mentally and physically,' so thankfully being here I was able to develop all three of those aspects," she says.

From a Navy family, Hudson says her father did not regale her with sea stories. Instead, he instilled in her a need to serve her country, and from an early age she knew she wanted to be in the Navy.

A submariner and an academy grad himself, her father did not fully embrace his daughter's decision to come to the academy, but he eventually came around -- including supporting her initial decision to join the Marine Corps, she says.

"He thought he was shocked when I got in here [the academy]," she says, laughing. "He's up for a new round of that now. He's very excited."

But there are those who are not excited, and she is ready for that.

"There were people that did not want to see us at the Naval Academy," Hudson says, referring to opposition to women attending the service academies.

"I like to think I am a professional and hope those who have criticisms are also professionals and they won't let their concerns hinder their competency and their mission," Hudson says.

There is going to be anxiety around this whole change, but I have had very positive experiences with my classmates and officers.
--Marquette Ried, U.S. Naval Academy midshipman
RELATED TOPICS

For Ried, the chance to become a member of this first class of female submariners means giving up a future career in another highly competitive field, naval aviation.

As an aerospace engineer and top student at the academy, Ried was one of the select in her graduating class to get a coveted aviator position and have the opportunity to head off to flight school after graduation.

"I was doing my initial flight training and was not enjoying it as much as I thought," she says. "The submarine opportunity came along and everything I was looking for was in that community."

Her eye set on leadership, she came to the academy for the opportunity to lead and become a pilot and make a difference in people's lives, she explains.

A career in submarines was not originally in the plan.

"It was never anything I looked at until my senior year; [then] this opportunity came up," she says.

"I wanted that more technical leadership right out of the academy," adds Ried.

She shows very little concern publicly for what is coming, and says she has had nothing but positive conversations with people.

"There is going to be anxiety around this whole change, but I have had very positive experiences with my classmates and officers," she says.

"Everybody is really excited about us coming aboard and I have not met a lot of resistance personally," Ried says.

As graduation at the end of May approaches, Hudson and Ried and their nine classmates in the group are looking forward to what is ahead, but they say there is still a lot of administrative work to be done before they can start sub school.

When it does start, the women will go through an intensive 15-month submarine officer training program, which includes nuclear power school, submarine training and the Submarine Officer Basic Course.

When the orders come in from the Navy that will start these women's careers as well as make history, they doubt there will be any regrets about changing the direction they thought they were going.