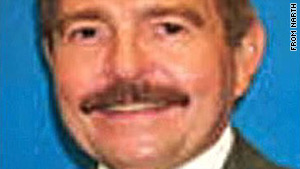 George Rekers resigned from the board of the National Association for Research & Therapy of Homosexuality.

(CNN) -- The anti-gay rights activist who recently toured Europe with a male escort has resigned from a group that promotes counseling for people who "struggle with unwanted homosexuality," though the man insists that he is not gay.

George Rekers resigned from the board of the National Association for Research & Therapy of Homosexuality, the group's website said Tuesday.

"I am immediately resigning my membership in NARTH to allow myself the time necessary to fight the false media reports that have been made against me," Rekers said in a statement posted on the group's website. "With the assistance of a defamation attorney, I will fight these false reports because I have not engaged in any homosexual behavior whatsoever.

"I am not gay and never have been," the statement said.

The association accepted the resignation, saying on its website Tuesday that it "would hope that the legal process will sufficiently clarify the questions that have arisen in this unfortunate situation."

The group has scrubbed Rekers' writings from its site, with a page that formerly featured his work now bearing the message, "Sorry, you've reached a page that doesn't exist."

He received about $120,000 to appear as an expert witness in a 2008 case challenging Florida's ban on gays and lesbians adopting.

Rekers has written that gays are a "deviant segment of society."

Revelations of Rekers' trip to Europe with a male escort surfaced last week, shortly after he returned to the U.S.

The male escort who traveled with Rekers -- who goes by the name Lucien, though that is not his given name -- said that he advertises his service exclusively on the website rentboy.com, where visitors can choose from hundreds of male escorts in suggestive and revealing poses.

Lucien says Rekers first contacted him through the site. He was hired to give Rekers daily "sexual massages" on the trip, which took them to London and Madrid, Lucien says.

"He got excited," Lucien said of the massages, adding that Rekers wanted Lucien to touch him, though Lucien said that he didn't have sex with Rekers and that Rekers didn't ask to have sex.

According to a contract Lucien showed CNN, he was hired to carry Rekers' bags and to provide at least one hour's worth of massage every day in their shared room, at a cost of $75 a day.

The contract also stipulated that Lucien spend at least eight hours a day with Rekers, including sharing two meals.

Rekers' website provided a different account of how he met Lucien and of the trip, saying he needed help carrying luggage because of an "ongoing condition following surgery."

The site said Rekers "found his recent travel assistant by interviewing different people who might be able to help, and did not even find out about his travel assistant's internet advertisements offering prostitution activity until after the trip was in progress. There was nothing inappropriate with this relationship."

Rekers' site said he "was not involved in any illegal or sexual behavior with his travel assistant."

Rekers is a distinguished professor emeritus at the University of South Carolina School of Medicine, according to his website.

Lucien says Rekers told him about other boyfriends before the European trip. But Lucien says that in their ongoing conversations, Rekers continues to deny that he is gay.

"I actually asked him over the phone, 'Do you think you're gay?' and he said, 'no'," Lucien said, adding that Rekers asked him not to share his story with the media.

In a statement on its website Tuesday, the National Association for Research & Therapy of Homosexuality said it stood by its work promoting therapy for gays who wish to be straight.

"(T)hese personal controversies do not change the scientific data, nor do they detract from the important work of NARTH," the statement said. "NARTH continues to support scientific research, and to value client autonomy, client self-determination and client diversity."