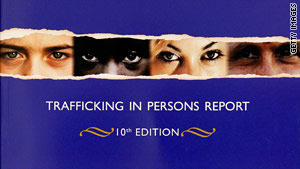 The report says the United States complies with a victims' protection act but still has forced labor and prostitution.
STORY HIGHLIGHTS
RELATED TOPICS

The 373-page "Trafficking in Persons Report 2010" says some 12.3 million adults and children are in forced labor, bonded labor, and forced prostitution around the world. Only 4,166 trafficking prosecutions were successful last year, according to the report.

The United States listed itself in the report's top tier of compliance with minimum standards set forth by the U.S. Trafficking Victims Protection Act in 2000, but it is nonetheless "a source, transit, and destination country for men, women, and children subjected to forced labor, debt bondage, and forced prostitution," according to the report. Twenty-seven other countries also were listed in the Tier 1 category for compliance.

At the State Department on Monday, Secretary of State Hillary Clinton talked about human trafficking cases found in American communities.

"In some cases, foreign workers, drawn by the hope of a better life in America, are trapped by abusive employers," she said. "And there are Americans, unfortunately, who are held in sexual slavery. Some find themselves trapped through debt to work against their will in conditions of modern-day bondage."

The report includes the stories of victims from over a dozen countries, including Kenya, the Philippines, Albania, Thailand, and the United States.

One victim, "Harriet," is described in the report as an American girl who ran away from home when she was 11 years old and moved in with a 32-year-old man who sexually and physically abused her and persuaded her to become a prostitute.

"In the next two years, Harriet became addicted to drugs and contracted numerous sexually transmitted diseases," according to the report.

"The police arrested Harriet when she was 13 and charged her with committing prostitution. They made no efforts to find her pimp," the report says. "Harriet was placed on probation for 18 months in the custody of juvenile probation officials. Her lawyers have appealed the decision, arguing that since she could not legally consent to sex, she cannot face prostitution-related charges."

The State Department calls human trafficking one of the most profitable criminal industries in the world, along with the illicit trade in drugs and weapons.