Man who tried self-amputation while trapped reflects on his survival (CNN) -- A Connecticut man who attempted to amputate his own arm after it was trapped in a furnace credits "human spirit" for his survival.

"Human spirit, its strong," Jonathan Metz, 31, of West Hartford, Connecticut, said Tuesday during a news conference at a hospital where he is being treated following his ordeal last week.

"And trust me, whether it's cutting your arm off or finding some other way, I think all people would be surprised by what they're capable of," added Metz, whose arm became trapped in the vents of a furnace.

Speaking from Hartford's Saint Francis Hospital, Metz explained how he was reaching for a fallen vacuum cleaner piece when his arm became stuck in the vents of the furnace.

After 12 hours of yelling for help, Metz had no sense of when he would be rescued. He said he became desperate when he started to smell rotting flesh, and knew had to take extreme measures if he was going to survive.

"It took me about six hours to psych myself up to the point where I thought I was capable of actually doing what I thought needed to be done," Metz said. 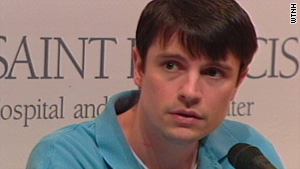 "After about 18 hours of being trapped, with my arm stuck in the boiler, I fashioned a tourniquet out of the shirt I was wearing, tied it as best I could, and started cutting," said Metz. "As luck would have it, I had the blades that I would use with some of my power tools."

Metz said about half way through the cut "the pain became absolutely too much to continue."

"I would describe I guess what was a near-death experience at that point. I had given up," Metz said.

It was then that he began to think about what he would leave behind if he was never rescued, he said.

"I started having these images about my dog Porsche upstairs who was probably also battling dehydration at that point, and my fiance, and my parents, and my friends."

With dehydration setting in, Metz could feel his tongue swelling and knew he needed water. He was able to turn on the boiler release valve and drink some of the dirty water.

The water, which he scooped up to his mouth with his sandal, gave him new energy and he continued calling for help.

Eventually, friends -- worried after not seeing Metz for three days -- alerted police. Metz was falling unconscious when rescuers found him, and he said Tuesday that if his friends hadn't alerted police, headlines would have proclaimed his death, rather than his amazing rescue.

The arm could not be reattached due to infection, according to doctors from Saint Francis Hospital.

Dr. David Shapiro was inspired by Metz's actions saying, "The way that he did it was frightening, admirable, horrifying, brave, and just amazing to us."

Tina Varona, media relations manager for the hospital, said that Metz's attempt saved his life because sepsis, when the bloodstream is overwhelmed by bacteria, was beginning to set into his injured arm.

"Surgeons were able to clean and cover the bone with muscle tissue that was still healthy and viable, thanks to Metz's efforts. They were able to modify and close up the wound in a two-and-a-half hour operation," Varona said.