Five flavors frozen out at Baskin-Robbins 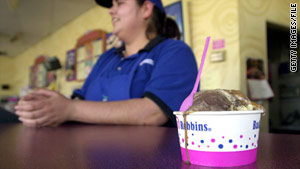 (CNN) -- Baskin-Robbins is putting five of its signature 31 flavors in the deep freeze.

The company, which has thousands of outlets around the globe, is replacing some old flavors with new ones to celebrate National Ice Cream Day in the U.S. on Sunday, and Baskin-Robbin's 65th anniversary.

Caramel Praline Cheesecake, Campfire S'mores, Apple Pie a La Mode and Superfudge Truffle are leaving the list. French Vanilla, a staple since 1945, is out, too.

Srinivas Kumar, chief brand officer at the company, said "over the decades we have retired some of our iconic flavors into our deep freeze -- like 'Miami Ice' from the 1980s and 'Beatlenut' in the 1960s -- but never before have five flavors gone into the deep freeze at one time."

The U.S. ice cream industry generates more than $21 billion in annual sales, and about 9 percent of all the milk produced by U.S. dairy farmers is used to produce ice cream, according to the International Dairy Foods Association.

There's no word yet on what the new Baskin-Robbins flavors will be. And as for the old ones -- get them while you can. They'll only be available as supplies last.