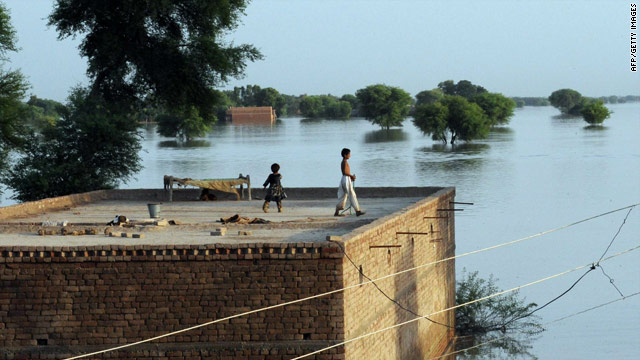 Pakistani children go to the top of a house surrounded by floodwater in Sindh province on Monday.
STORY HIGHLIGHTS

Washington (CNN) -- The State Department says long-term recovery and reconstruction efforts in flood-ravaged Pakistan could take "many, many months, if not years."

"The sheer impact still needs to be assessed, but will certainly be staggering," said Dan Feldman, deputy special representative for Afghanistan and Pakistan, at a press briefing on Monday .

Feldman, who surveyed the destruction by helicopter last week with a congressional delegation led by Sen. John Kerry, D-Massachusetts, described the damage as "epic and devastating."

"Agricultural fields, under water," said Feldman. "Roads and bridges, under water; roads continuously disrupted by water, so impossible to move people or food or supplies out; power plants literally under water."

Feldman said that in addition to the obvious need for immediate relief for what the United Nations describes as millions of displaced flood victims, the U.N. and other international donors will also need to focus on long-term recovery and reconstruction.

"We're looking at ways that we can redirect already existing funds through Kerry-Lugar-Berman and others to meet the needs of flood victims as soon as possible," Feldman said, "so programs for livelihood, for clinics, rebuilding schools, infrastructure that we had already planned, which can be redirected to get to flood victims as quickly as possible."

Feldman was referring to the Enhanced Partnership with Pakistan Act of 2009 sponsored by Kerry, Sen. Richard Lugar, R-Indiana, and Rep. Howard Berman, D-California. The law commits $7.5 billion in assistance to Pakistan over five years and is earmarked for "improving the living conditions of the people of Pakistan through strengthening democracy and the rule of law, sustainable economic development and combating terrorism and extremism," according to the law's sponsors.

Feldman described "a real galvanizing moment" last week, when greater amounts of contributions from the international community began to pour in.

"We've seen over $700 million pledged, including our own $150 million commitment, from over 30 countries, and an additional $300 million in as yet undefined commitments from a range of other countries," he said.

Deaths are still relatively low at this point, "at about the 1,500, 1,600 mark," said Feldman, but officials are concerned about communicable illnesses breaking out among the millions of displaced victims. The World Health Organization announced Sunday more than 200,000 cases of acute diarrhea have been diagnosed, and there are more than 250,000 cases of disease including scabies.

Water levels remain quite high, Feldman said, though some are starting to recede. Broken dikes have aggravated flooding in some areas, he said.