Some doubts about new levees in New Orleans
STORY HIGHLIGHTS

New Orleans, Louisiana (CNN) -- We're cutting across the open water to the steady growl of a Coast Guard boat's twin engines. The heat index is somewhere between 100 and 1,000 degrees. Sure, you could cook an egg on the deck, but in this heat who'd want to?

It seems about right, since I've come to see what spurred some of the hottest words in the whole post-Katrina blame game: the flood protection system. Specifically, I'm here to look at the improvements that have been made since the storm, and to say they are substantial would be like saying the Superdome is a nice-size room.

Col. Robert Sinkler chats easily as we travel toward cranes, pilings, and massive concrete structures buzzing with workers in the ridiculous heat. "We're doing about 15 to 20 years of construction work in about 36 months," says Sinkler, commander of the U.S. Army Corps of Engineers' Hurricane Protection Office.

The centerpiece being unveiled this week is a two-mile-long storm surge barrier that stretches across one end of a nearby lake. With a crenelated top, it looks like a modern-day castle wall set in the middle of a great body of water, and it serves a similar purpose.

But there is much more: Pilings reach deep down into the substrata; concrete has been mixed into soil on hundreds of miles of improved levees; new pumping stations are being put into place; huge T-walls are raised to tower over the older, weaker I-walls that tried, and in some cases failed, to stand against Katrina.

Should another big storm come, these heavily reinforced battlements are designed to confront the rising water in a series of stages, starting miles from New Orleans.

Combined with the natural protections afforded by barrier islands and marshlands, it is as if a series of concentric rings of defense have been put up to, if not entirely stop a fierce storm, at least to pull most of its teeth.

I take a walk along the top of this wall with the engineer in charge, Vic Zillmer, and ask him, "If this system had been completed and in place when Katrina hit, would we have seen the results that we did?"

"Absolutely not," Zillmer says. "It would have been very, very different."

I'm no engineer, but it is all undeniably impressive and the Corps' assurance that this will work much better than the old system (which was an ugly and ineffective net of overlapping local, state and federal jurisdictions) seems plausible.

And for the sharpest critics of the levee and floodwall system, that's the problem. One of them is Harry Shearer, the actor and writer who does voices for "The Simpsons" and helped create "This Is Spinal Tap."

Shearer has just directed a documentary about the flood protection system called "The Big Uneasy." 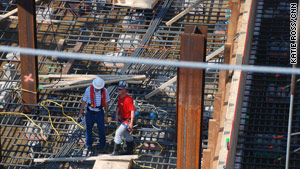 Construction on new New Orleans storm surge barriers is expected to be completed by next summer.

Shearer and groups such as Levees.org want much more accountability. They have technical questions about pumping stations, about possible weaknesses in the Corps' plan, about the need for more commitment from federal authorities to restore those natural defenses of wetlands and islands offshore.

In short, they don't trust the Corps much, and they trust the murky net of government agencies involved in the flood protection system at all levels even less.

The Corps knows it and accepts it. Maybe it's because too many experts after Katrina concluded there really were two disasters; the storm itself and the massive failure of the system that should have stood firm, but instead gave way, allowing all that water into neighborhoods, where it killed and destroyed.

[The Army Corps of Engineers has] given us these reassurances before.
--Harry Shearer, actor, activist
RELATED TOPICS

The Corps knows it must rebuild trust along with the fortifications it is erecting around the city.

Back atop the gleaming, new surge barrier out on the edge of town, Zillmer tells me, "As far as design goes, it's the best humans can do at this time."

He leans against a concrete wall, and as we head back to the boats, his shoulder blades leave a perfect imprint of sweat. He laughs. "You've got snow angels up north. That's a sweat angel."

The sweat angels are working furiously here, trying to complete this project before the start of the next hurricane season, and hoping for all their critics, the proof will be in its performance the next time a devil of a storm comes this way.