As Katrina wreaked havoc, mom searched for her child 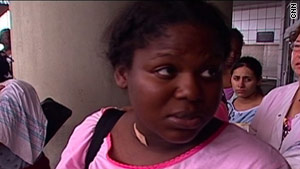 LaShawn Traylor had no idea where her newborn son was when she was evacuated from New Orleans.

CNN's Ed Lavandera revisits the story of how he met a young mother separated from both her newborn son and the rest of her family amid Hurricane Katrina, and how their interview led to reuniting them.

Jackson, Mississippi (CNN) -- LaShawn Traylor was rushed to the hospital as Hurricane Katrina was carving its way through South Florida on August 25, 2005.

She couldn't breathe and she was seven months pregnant. Doctors told her she had an enlarged heart and needed an emergency Cesarean section or Traylor and her baby would die.

Lorenzo Traylor was born weighing 2 pounds, 11 ounces. But LaShawn Traylor slipped into a medically induced coma and was put on a ventilator inside Methodist Hospital in east New Orleans, Louisiana, not far from the city's Lower 9th Ward.

Read about another mother's separation story

As she lay in the coma, Hurricane Katrina became a monster storm and the pleas for New Orleans residents to evacuate got louder. Lionel Traylor decided he and his wife's four other children would drive to Jackson, Mississippi for a few days.

"I left a picture of Lorenzo on her chest and kissed her goodbye. I thought we'd be back in a few days," Lionel Traylor said.

Three days later, LaShawn Traylor emerged from the coma, but she was alone. On August 28, 2005, then-New Orleans Mayor Ray Nagin issued a mandatory evacuation of the city.

Nurses told Traylor her premature newborn was taken to another hospital for better care. This was the beginning of Traylor's Katrina ordeal, a separation that would take months to overcome.

"When I woke up they said the storm was coming, but it was sunny outside," said Traylor. "I couldn't imagine how serious it was."

The next part of the story is well documented. The storm came, the levees broke and New Orleans flooded. The bottom floors of Methodist Hospital filled with water. There was no escape for Traylor and hundreds of other patients.

"It was horrific; it was chaotic. It was something out of a horror movie," she said.

The scene inside Methodist Hospital deteriorated with every passing hour. Without power, patients on ventilators were dying. Doctors and nurses were using their hands to keep the ventilator pumps going and patients alive. Food and water was dwindling.

"I thought I was going to die," Traylor said. "It was pitch dark and it was really scary."

And in the midst of all this, Traylor couldn't stop thinking about her baby boy. She hadn't even had a chance to hold him or call him by his new name, Lorenzo.

She'd been told that Lorenzo was taken to Children's Hospital. But if her world was collapsing what was happening to Lorenzo, she thought to herself. As more time passed she feared the worst.

"I thought Lorenzo was dead already," Traylor said. "I thought who in the world is going to keep up with a 2-pound baby during times like this."

Two days after the storm, helicopters started landing on the rooftop of Methodist Hospital to evacuate patients. Traylor says she was airlifted and dropped off on a bridge on the western edge of New Orleans.

She spent the next 18 hours sitting under a bridge, still recovering from the delivery, waiting for help. LaShawn Traylor says, "a nurse told me she didn't think I was going to make it." Dehydration was taking its toll.

On September 1 help arrived in the form of a bus ride to the New Orleans airport and a seat on an airplane out of town. When she arrived at the airport, I was there reporting on the evacuation efforts.

Traylor was in a line of female patients evacuated from the Methodist Hospital maternity ward. All the other mothers had newborn babies in their arms, LaShawn Traylor was only holding Polaroid pictures of Lorenzo.

She approached me and said, "I don't know where my baby is. I'm looking for my baby." It was a rushed interview, the moment so chaotic that I only had time to get a few basic facts.

But moments later we broadcast her story, and Traylor and the picture of her baby boy were loaded onto a plane bound for Texas.

"All they told us is you need to get out of the city. I didn't want to leave the city without knowing where my baby was; I just thought that was weird," Traylor said.

A friend of Traylor saw the interview and relayed word to her husband, who had now gone six days without hearing a word about his wife and baby.

But when Lionel Traylor finally tracked down his wife in a Red Cross shelter in Fort Worth, Texas, the most important part of the story wasn't passed along accurately.

"I thought Lorenzo was with her and when I first saw her she told me 'I don't know where the baby is' and that's when my heart sank," said Lionel Traylor.

Aid workers and caregivers heard Traylor's story and started making an intense round of phone calls. In a September 14, 2005, posting on the website of U.S. Rep. Michael Burgess of Fort Worth, the congressman's staff detailed the efforts to track down Lorenzo.

"Lorenzo had traveled to three different hospitals during the hectic evacuation," according to the congressman's website. "After 24 hours of searching..."Baby Boy Traylor" had been located at Baton Rouge General. The moments that followed were priceless -- tears of joy followed by laughter."

The family tried to return to New Orleans, the city both LaShawn and Lionel Traylor had always called home. They returned four months after Katrina to find their home destroyed by the floodwaters. They moved into a FEMA trailer but for a family of seven it proved too difficult.

"Going back to a city that needed to be rebuilt was just too much for the kids, leaving New Orleans was really hard," said LaShawn Traylor.

In Jackson, Mississippi, the Traylor family is flourishing. Lorenzo is healthy and 5 years old. LaShawn Traylor is 31 and returned to school, completing degrees in accounting and psychology. Lionel Traylor is a full-time pastor of The Church at Jackson.

"Life is better now," says LaShawn Traylor. "What Katrina did for me was a wake-up call; it made me start to live my life in a better way. I'm living my life now with a purpose."