What the heck is a zedonk? 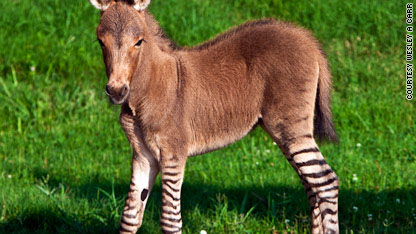 Dahlonega, Georgia -- A baby zedonk, an unusual cross between a donkey and a zebra, is an eye-catching animal attracting attention from around the world.

The animal, named Pippi, was born July 21 at the Chestatee Wildlife Preserve, near Dahlonega, Georgia. Her mother is "Sarah," a donkey, and the father is "Zeke," a zebra.

Pippi has black-and-white-striped legs and a brown back. C.W. Wathen, the owner of the preserve, said she was named after Pippi Longstocking, the stripe-socked heroine created by children's author Astrid Lindgren.

"Everyone that comes out can't believe what they are seeing," Wathen said. "We've gotten calls from Russia and have even had visitors from France and England."

"One group of visitors said they came to see Pippi because they got a call from their friends in Egypt that told them about her."

Dr. Ben Benson, a licensed veterinarian in Georgia who cares for animals at the preserve, said it is very rare for a female donkey and a male zebra to mate.

Everyone that comes out can't believe what they are seeing.
--C.W. Wathen, Chestatee Wildlife Preserve
RELATED TOPICS

"A male donkey and female horse produce mules all of the time, but it is highly unusual for a female donkey to breed with a male zebra," said Benson.

Wathen said handlers at the preserve find her easy to manage and Pippi seems to have the characteristics of both a zebra and donkey, so far.

"After her third day of life she spoke -- and she speaks zebra," chuckled Wathen. "It's crazy."

Animals on the preserve have shared the same fields for more than 30 years, but this is the first time there has been any known cross-breeding, said Wathen.

"We were expecting a baby donkey and had been worried that something was wrong, because the mother was way overdue," said Wathen. "We never thought about having a zedonk, so I guess that goes to show you that anything is possible."

Dr. Benson said he speculates the zedonk could live into her 20s and would not be able to reproduce, but time will tell all.

The preserve where Pippi lives is a nonprofit organization dedicated to rescuing animals.

In addition to Pippi, the preserve is home to a baby grizzly bear, white tigers and numerous other animals.