Family thinks it has Michelangelo painting 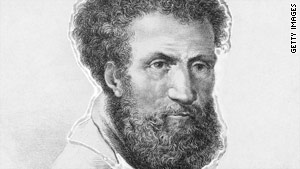 Michelangelo was a leading figure of the Italian Renaissance. A New York family believes it has a painting by him.
STORY HIGHLIGHTS
RELATED TOPICS

New York (CNN) -- A painting that hung for years in the family living room of a retired Air Force officer in upstate New York may be the lost work of Italian master Michelangelo, according to at least one expert.

The piece, referred to by the family as "The Mike," has been with the family of Lt. Col. Martin Kober for "over 80 years," said Kober's spokesman Stephen Bell. "It came in with his great-great-grandfather."

If the painting of the Virgin Mary weeping over the crucified Jesus Christ were authenticated it would, of course, be worth tens of millions, if not more.

Bell told CNN that the painting originally hung over the family fireplace in Rochester, New York. When Kober was younger, the painting was knocked down by a tennis ball and the family decided to wrap the piece up and put it behind a sofa.

The family has always known "The Mike" was a Michelangelo, according to Bell, and knew that it was exhibited in two museums in 1885.

However, it was not until Kober retired in 2003 that he decided to look into the origins of the family heirloom more closely.

Kober searched on the Internet, talked to museums, and contacted experts, one of whom was Michelangelo expert Antonio Forcellino, who flew to the United States to examine the piece.

Forcellino, who is now restoring the piece in Italy and preparing it for exhibition there, told CNN he strongly believes the painting is an authentic work by Michelangelo called "The Pieta with the Two Angels."

He also stated that he believed the work is based on a Michelangelo drawing currently held at the Isabella Stewart Gardner Museum in Boston.

According to Forcellino, his claim comes from an expertise as a restorer and because the piece is "so well documented," particularly citing letters referring to the painting by 16th century Italian noblewoman Vittoria Colonna, believed to be the original owner, and Italian Cardinal Ercole Gonzaga, who lived about the same time. Michelangelo died in 1564.

Michelangelo expert and Washington University art history professor, William Wallace, who saw the painting before it was restored, does not share Forcellino's certainty.

He concedes the work "is very nice and very impressive," and "we're certainly talking about an object from the 16th century." But he doubts the authenticity of the piece, stating, "Michelangelo I don't think actually painted this particular panel."

"In the Renaissance, anybody looking at this would call it a Michelangelo ... and they wouldn't have cared who painted it. We actually care who put a hand to the brush," Wallace told CNN.

This is not the first time differing opinions have arisen over the authenticity of supposed Michelangelo findings, Wallace tells CNN. "Since 1900, we've had a rediscovery of Michelangelo every two years... and almost every one has been forgotten."

However, there have been some more convincing than others. A work found in 1996 is believed to be a Michelangelo sculpture of Cupid.

Recognizing such doubts, Forcellino told CNN, regardless of what you believe, "it is a painting of extraordinary interest," and he will continue to restore the work in Italy before it is exhibited.