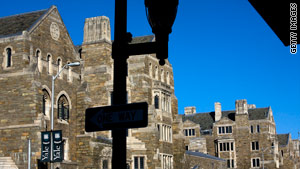 (CNN) -- In a YouTube video that went viral, chants encouraging rape are heard, allegedly being expressed by a fraternity's new recruits as they marched through Yale University last Wednesday.

The phrases sparked discussion among members of the Yale community and beyond.

In a statement by the board of directors of Delta Kappa Epsilon, the international fraternity says it strongly condemns the actions of the Yale chapter and acknowledges that the sentiments expressed were, indeed, offensive.

On Friday, approximately 150 students, hailing mostly from The Yale Women's Center and Delta Kappa Epsilon, met and discussed the incident. Mary Miller, dean of Yale College, issued a statement saying the university hopes such discussions will lead to mutual respect.

Miller would not say if disciplinary actions would be taken by the university, saying "any and all disciplinary processes are confidential at Yale."