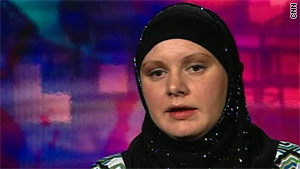 (CNN) -- The U.S. Justice Department filed a legal brief Monday stating its support of the continued construction of a controversial mosque in Murfreesboro, Tennessee, that was targeted by arsonists in August.

In the friend-of-the-court brief -- filed in response to a lawsuit brought by local landowners against Rutherford County, Tennessee -- the department argued that practicing Islam is a freedom protected under the First Amendment of the Constitution.

"A mosque is quite plainly a place of worship, and the county rightly recognized that it had an obligation to treat mosques the same as churches, synagogue, or any other religious assemblies," said Thomas E. Perez, assistant attorney general for civil rights. "This is not only common sense; it is required by federal law. The Justice Department is committed to protecting rights of Americans of all faiths to build places of worship and to worship in peace."

The mosque's construction has provoked controversy in Murfreesboro, about 35 miles southeast of Nashville, and statewide.

In July, several hundred opponents of the mosque staged a march against the project. Some objected to Islam itself, carrying signs with slogans including "MOSQUE LEADERS SUPPORT KILLING CONVERTS," while others opposed the project for environmental reasons.

"You could even argue whether being a Muslim is actually a religion, or is it a nationality, way of life, a cult, whatever you want to call it," Ramsey, then a candidate for Tennessee governor, said at a rally.

And a fire in August at the construction site destroyed an earth mover and damaged three other vehicles in what police determined to be the work of one or more arsonists.

The Islamic Center of Murfreesboro has existed in the Murfreesboro area for more than a decade, according to its website, and currently meets about a mile from the site of the future mosque.

The congregation purchased a 15-acre plot in 2009 and announced plans for a center that will include a mosque, educational facilities, a gym, cemetery and various recreational areas, including tracks, pavilions and a playground.

A plywood sign announcing the new center was spray-painted "Not welcome" this year. Another sign went up, but vandals destroyed that, too.

Shortly after the August blaze, Camie Ayash, who is building the mosque with her husband, was standing at the site with other supporters. She and others heard gunshots and called the sheriff's department. The Tennessean reported that moments after the shots, a vehicle drove by with its horn blasting "Dixie."

"That was it for me," Ayash said. "That really scared me."