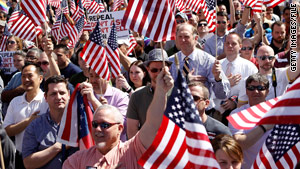 (CNN) -- A federal appeals court sided with the government Monday, allowing the military to maintain its "don't ask, don't tell" policy during an appeal of a lower court ruling that the law barring openly gay and lesbian soldiers is unconstitutional.

The ruling by a three-judge panel of the 9th U.S. Circuit Court of Appeals means that the policy remains in place while the government appeals a federal judge's ruling against it. One of the three judges on the panel dissented against parts of Monday's decision.

In response to the panel's ruling, the Log Cabin Republicans, a GOP gay rights group that filed the lawsuit against the "don't ask, don't tell" policy, can now appeal it to the full 9th Circuit appellate court and or make an emergency application directly to the U.S. Supreme Court.

Dan Woods, an attorney with White & Case who represents the Log Cabin Republicans, said the appeal would continue and he raised the possibility of seeking emergency relief from the nation's highest court.

"We will continue to fight on for the constitutional rights of these Americans and look forward to a favorable decision on the merits of the appeal," Woods said in a statement. "Meanwhile, we will discuss the court's order with our client to determine whether we will ask for a review of the order by the U.S. Supreme Court."

In Monday's ruling, the judges said they had to weigh the harm of continuing the "don't ask, don't tell" policy against the potential harm in forcing the military to drop the policy before it is ready.

"We conclude that the government's colorable allegations that the lack of an orderly transition in policy will produce immediate harm and precipitous injury are convincing," the ruling said. "Colorable" means the court believes the allegations have a reasonable chance of being found valid.

"We also conclude that the public interest in ensuring orderly change of this magnitude in the military -- if that is what is to happen -- strongly militates in favor of a stay," the ruling said.

In their ruling, the judges also noted that legislation pending before Congress to repeal the policy would render the case before them moot.

The House has passed a repeal provision, and the Senate is expected to consider it as part of a broader defense authorization bill when it returns for a lame-duck session in mid-November.

President Barack Obama wants to repeal the "don't ask, don't tell" policy and reached an agreement with Defense Secretary Robert Gates and Adm. Mike Mullen,the chairman of the Joint Chiefs of Staff, on a process that includes a military review of how to make a successful transition to openly gay and lesbian soldiers serving alongside straight colleagues. Obama, Gates and Mullen would then have to certify the repeal.

The case puts Obama's administration in an unusual position of supporting a repeal but filing court motions to prevent it from happening faster than planned. The legislation before Congress includes the process for repeal agreed to with Gates and Mullen.

In response to the court case, Gates recently raised the level at which gay and lesbian troops can be discharged under "don't ask, don't tell" by ordering that it only be done by the secretaries of the Army, Navy and Air Force.

In a memo written to the heads of all the military services, Gates said his action was taken in direct response to the legal uncertainty surrounding "don't ask, don't tell" law and policy.

"Effective immediately and until further notice, no military member shall be separated ... without the personal approval of the secretary of the military department concerned, in coordination with the under secretary of Defense for personnel and readiness and the general counsel of the Defense Department. These functions may not be delegated," Gates wrote.