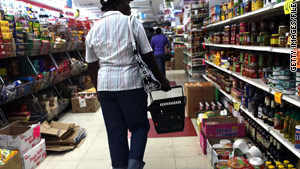 A woman in Brooklyn, New York, shops at a dollar store in September. A report examines hunger in U.S. households.
STORY HIGHLIGHTS

(CNN) -- The number of Americans fighting off hunger stayed level last year, though food insecurity rates remain the highest they have been since the federal government began keeping track 15 years ago, a Department of Agriculture report released Monday found.

About 14.7 percent of U.S. households were "food insecure" in 2009, meaning they had difficulty feeding one or more of their members at some point last year due to a lack of financial resources, according to the report.

That equates to 17.4 million households total, or roughly 45 million people.

This year's rate marked a slight increase in percentage from 2008, when 14.6 percent of American households had trouble putting food on the table.

The situation was especially dire for more than one-third of those households -- 6.8 million total, equating to 5.7 percent of all U.S. households -- that the report's four authors classified as having "very low food security."

This number, too, changed little in 2009 compared to the previous year.

How to Help
A sampling of charities and organizations where you can contribute your time or money to help fight hunger:

-- Feeding America is a network of local and regional food banks across the United States.
-- The federal government offers volunteer opportunities through volunteer.gov, volunteeringinAmerica, serve.gov and nationalservice.gov.
-- You also can find volunteer opportunities through charityguide.org, idealist.org and volunteermatch.org.
-- A limited list of hunger- and poverty-related charities is at charity.com.
-- Organizations working on global hunger issues include Action Against Hunger, Food for the Hungry and Global Foodbanking Network.

-- Charity Navigator keeps an eye on organizations to make sure they're legitimate and tracks how they use their donations.
-- Possibly the easiest and lowest-cost way to help is to simply go to thehungersite.com every day and click on the yellow box.

A lack of resources prompted one or more members of these households to eat much less or otherwise adjust their eating patterns.

The typical household in this category struggled with food issues for at least a few days a month over seven months of the year, the report said.

Households headed by single parents were more likely to struggle with food insecurity than those with two parents at home.

Hunger-related issues were more prevalent among African-American and Hispanic households than white ones, the study found.

Access to food was also more common in large cities than in rural areas, exurbs or suburbs.

Most of those classified as "food insecure" reported getting benefits from the federal government's three main anti-hunger initiatives: the Supplemental Nutrition Assistance Program, the National School Lunch Program and the Special Supplemental Nutrition Program for Women, Infants and Children, better known as WIC.

In a press release, the U.S. Department of Agriculture reported that 18.7 percent more people had participated in the former program in 2009 over 2008. Rates also rose for the "free lunch" program (up 5.4 percent) and WIC (up 5.8 percent).

"This report highlights just how critical federal nutrition assistance programs are for American families," USDA Under Secretary for Food, Nutrition and Consumer Services Kevin Concannon said in a statement.

The annual report from the Economic Research Service extrapolated from surveys of 46,000 households conducted on the Department of Agriculture's behalf by the U.S. Census Bureau. People responded to questions such as their ability to afford balanced meals, whether they adjusted the size of meals due to lack of money, or if they ever went hungry due to a lack of financial resources.