Homeland Security teams up with Walmart for safety 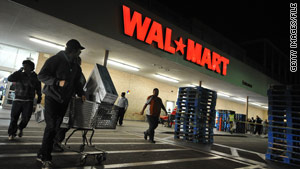 (CNN) -- Walmart will join the Department of Homeland Security in a program called "If You See Something, Say Something" which encourages the American public to take an active role in ensuring the safety and security of the nation, DHS said Monday.

"Homeland security starts with hometown security, and each of us plays a critical role in keeping our country and communities safe," Secretary Janet Napolitano said as she thanked Walmart and the more than 320 stores who joined the national campaign Monday.

"This partnership will help millions of shoppers across the nation identify and report indicators of terrorism, crime and other threats to law enforcement authorities," Napolitano said.

The "If You See Something, Say Something" campaign was originally implemented by New York City's Metropolitan Transportation Authority as a simple and effective program that engages the public and key front-line employees to report indicators of terrorism, crime and other threats to authorities, according to the DHS statement.

The program has already partnered with the Mall of America, the American Hotel & Lodging Association, Amtrak, the Washington Metropolitan Area Transit Authority, sports and general aviation industries, and other organizations across the country, DHS said.