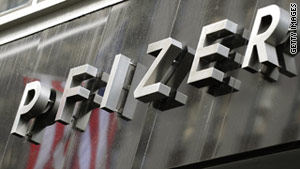 Pfizer says and allegation made in a cable given to WikiLeaks is preposterous.
STORY HIGHLIGHTS

(CNN) -- In April 2009, U.S. pharmaceutical giant Pfizer reached a financial agreement with a state government in Nigeria on lawsuits brought over an antibiotic that had been given to children during an outbreak of meningitis.

But a U.S. diplomatic cable quotes a Pfizer executive in Nigeria as saying the company also hired investigators to dig for evidence of corruption on the part of the then-attorney general in an effort to get him to drop a similar lawsuit at the federal level. The company has said the allegation is preposterous.

The cable, obtained by WikiLeaks, was published in the Guardian newspaper in London Thursday. The antibiotic Trovan was given to children in Kano state in 1996 as part of a clinical study during a meningitis outbreak. The Nigerian government said the drug caused deaths and deformities among children, and had been used without approval from Nigerian regulatory agencies. Pfizer maintained that the trial was conducted with the approval of the Nigerian government and consent of the participants' parents or guardians, and was consistent with Nigerian laws.

The company official named in the leaked cable is Enrico Liggeri, Pfizer's country manager in Nigeria. The redacted cable says: "According to Liggeri, Pfizer had hired investigators to uncover corruption links to Federal Attorney General Michael Aondoakaa to expose him and put pressure on him to drop the federal cases. He said Pfizer's investigators were passing this information to local media."

Several articles were subsequently published in the Nigerian press detailing Aondoakaa's "alleged" corruption ties. The cable continues: "Liggeri contended that Pfizer had much more damaging information on Aondoakaa and that Aondoakaa's cronies were pressuring him to drop the suit for fear of further negative articles."

Aondoakaa left office in February this year. He is quoted in the Guardian as saying; "I was not aware of Pfizer looking into my past. For them to have done that is a very serious thing."

Aaondoakaa has not been convicted of corruption charges, but in an unrelated case a Nigerian federal court in June declared him unfit to hold public office. CNN was unable to reach him immediately for comment.

Pfizer reacted to the Guardian article with a statement late Thursday that said, "Although Pfizer has not seen any documents from the U.S. embassy in Nigeria regarding the federal government cases, any notion that the Company hired investigators in connection to the former Attorney General is simply preposterous."

A spokesman for the company would not comment on whether Enrico Liggeri was still with Pfizer, but a LinkedIn profile describes him as the country manager for Pfizer. CNN was not immediately able to contact Liggeri.

According to the cable, Liggeri had asserted that the federal lawsuits "were wholly political in nature because the NGO Doctors Without Borders administered Trovan to other children during the 1996 meningitis epidemic and the Nigerian government has taken no action" against them. Doctors Without Borders has denied using Trovan. Liggeri is also quoted as saying that the suit had a "chilling effect" on international pharmaceutical companies.

The cable also says that "Pfizer underscored that the Nigerian representatives wanted lump sum checks and that Pfizer is concerned with potential transparency issues."