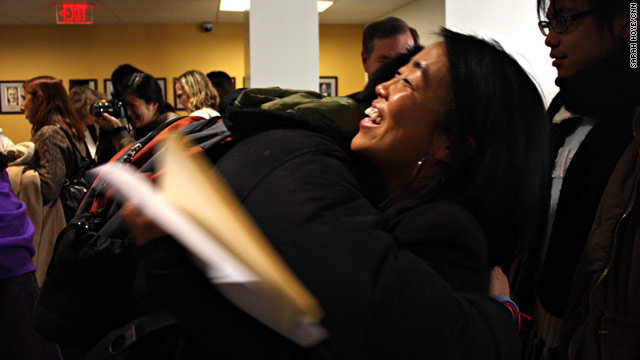 "Schools have an obligation to ensure a safe learning environment for everyone. We will continue to use all of the tools in our law enforcement arsenal to ensure that all students can go to school without fearing harassment," Thomas E. Perez, Assistant Attorney General for the Civil Rights Division said in a written statement.

The complaints were triggered by events on December 3, 2009, during which large numbers of Asian immigrant students from South Philadelphia High School were assaulted in and around the school throughout the day.

The attacks followed years of harassment against Asian students at South Philadelphia High School. In the days after the incident, more than 50 Asian students organized an eight-day boycott of the school in efforts to draw attention to what they felt was an inadequate response by the school staff to the ongoing harassment and violence.

"We will always remember December 3, but we will refuse to be defined by that day," Wei Chen, who was a senior at the time of the melee, told the members of the School Reform Commission where the settlement was announced. "A year ago we came to you as victims. Today we come to you as youth activists, as organizers and leaders who have shown the power to make change."

Nevertheless, the December boycott helped trigger nationwide attention to the violence against Asian students at South Philadelphia High. Months later, a federal investigation was launched following a formal civil rights complaint filed by the Asian American Legal Defense Fund. The Justice Department, which announced its investigation in August, instructed the school system to improve the treatment of Asian students.

"It's precedent setting. It's putting schools across the country on notice they must proactively address harassment, and it's a tremendous win for the students and their families," said Cecilia Chen, staff attorney for the Asian American Legal Defense Fund.

The settlements require South Philadelphia High School to submit an anti-harassment action plan, and continue implementing policies and procedures to prevent harassment based on race, color and/or national origin.

The students are the winners, said Zane David Memeger, U.S. Attorney for the Eastern District of Pennsylvania.

"We hope that the investigation and our settlement agreement represent the start of a corrective action plan that eventually will eliminate student-on-student harassment in all Philadelphia public schools, not just South Philadelphia High School," Memeger said in a written statement.

"I am delighted to see this moving forward and I look forward to this being a lasting resolution," said Stephen Glassman, chairman of the Pennsylvania Human Relations Commission. "Harassment and bullying are huge roadblocks to an education for immigrants and other minority children."

Advocate Helen Gym, a board member for Asian Americans United, said the settlement is a bittersweet accomplishment.

"This consent decree demonstrates that the violence at South Philadelphia High School was racial," said Gym, who helped many Asian students document their experiences. "We celebrate the lasting gains of these agreements; we hope that they are also welcomed with a measure of abiding humility and deep sorrow for the lack of action that required it."