Facebook's Mark Zuckerberg is TIME's Person of the Year 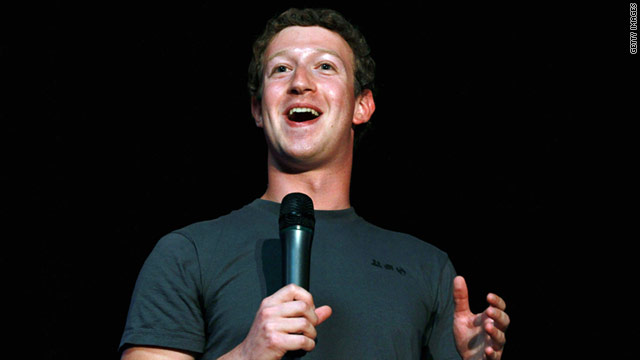 Zuckerberg created the widely popular and influential social networking site, which reflects a major transformation in the way people communicate and do business.

"Facebook has merged with the social fabric of American life, and not just American but human life: nearly half of all Americans have a Facebook account, but 70% of Facebook users live outside the U.S. It's a permanent fact of our global social reality. We have entered the Facebook age, and Mark Zuckerberg is the man who brought us here."

TIME noted that in less than seven years, "Zuckerberg wired together a twelfth of humanity into a single network, thereby creating a social entity almost twice as large as the U.S." If the service were a country "it would be the third largest, behind only China and India," TIME wrote.

We have entered the Facebook age, and Mark Zuckerberg is the man who brought us here.
--TIME Magazine.

"It started out as a lark, a diversion, but it has turned into something real, something that has changed the way human beings relate to one another on a species-wide scale. We are now running our social lives through a for-profit network that, on paper at least, has made Zuckerberg a billionaire six times over."

Read the TIME essay explaining "Why We Chose Him."

The annual Person of the Year award is a staple of American journalism. Others considered for the honor this year were Afghan President Hamid Karzai, the trapped Chilean miners, the Tea Party movement in the United States, and WikiLeaks founder Julian Assange.

Film-goers got a taste of Zuckerberg and the early days of the site in this year's movie, "The Social Network."

There, he studied Latin and became a fan of the classics. At Harvard University, which he attended for two years before dropping out to pursue Facebook, Zuckerberg "was known for reciting lines from epic poems such as "The Iliad,'" writes Jessica Vascellaro in The Wall Street Journal.

From Shakira to "ending desire," the interests Zuckerberg has listed on his private Facebook page are certainly unexpected. Among the others are "Eliminating Desire, Minimalism, Making Things, Breaking Things, Information flow, Revolutions, Openness."

Among his favorite TV shows, he lists "The West Wing," which, as The New Yorker's profile of Zuckerberg points out, was written by Aaron Sorkin, who wrote the screenplay for "The Social Network."

Friends and co-workers call him "Zuck." But Zuckerberg has earned other nicknames, too. The Wall Street Journal says his mom used to call him "Princely" when he was young. When he joined the Alpha Epsilon Pi fraternity at Harvard, his friends took to calling him "Slayer," writes Rebecca Davis O'Brien, who attended Harvard with Zuckerberg and wrote a piece about him in The Daily Beast.