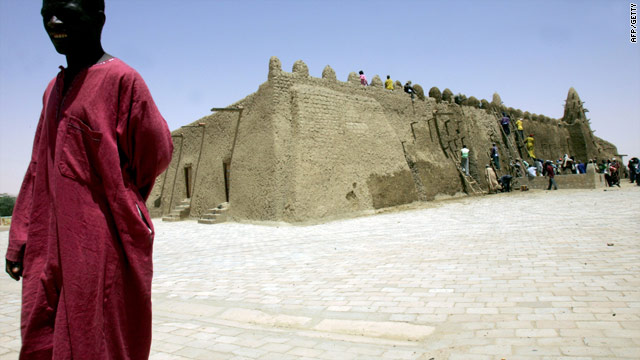 (CNN) -- Twenty-six people, at least half of them children, were killed in a stampede near a mosque in Timbuktu, Mali, according to a journalist who witnessed the incident.

Moulaye Sayah, who works for National Radio and Television of Mali and Mali's News Agency, both state-run, said at least 41 people were injured in the stampede, which occurred Thursday night during the Muslim festival of Mouloud, outside Djinguereber mosque.

The mosque is one of the most recognizable and ancient buildings in Timbuktu.

The prime minister's office said that Malian President Amadou Toumani Toure is on his way to Timbuktu to offer his condolences to the families of the victims.

Sayah said about 4,000 people, traveling to and from the mosque to celebrate the festival, had to squeeze through a narrow road. The main road that leads to the mosque is closed because of construction, Sayah told CNN.

Because the smaller road was so crowded, Sayah said, people began falling and some panicked, sparking the stampede. He said 16 bodies arrived at Timbuktu Regional Hospital -- 10 of them girls, three women and three boys.

The other 10 had been removed by their families at the scene of the stampede, he said.