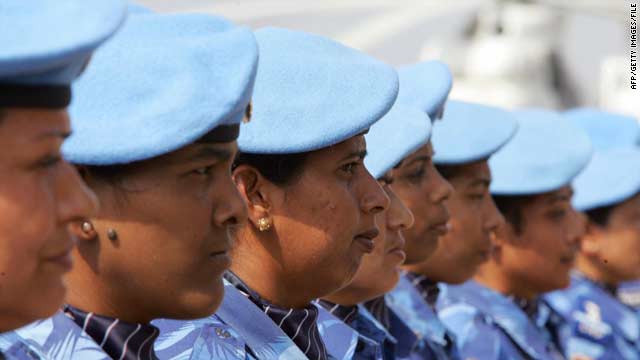 (CNN) -- They are trained in sophisticated combat tactics and weaponry, crowd and mob control, counter-insurgency. They patrol the streets of the Liberian capital, expected to keep the peace after years of war.

Most of them are also mothers and form an all-women unit from India, policing in a country where a 15-year conflict was characterized by sexual violence. Rape, according to the United Nations, remains the No. 1 crime reported to police in Liberia.

The Indian women were pioneers, the unit's experience in Liberia an experiment of sorts for the United Nations.

Clare Hutchinson, a gender affairs officer at the Department of Peacekeeping Operations in New York, said it was hoped that the Indian women would win the trust of Liberian women and perhaps serve as role models.

"It's about empowerment," she said. "It's quite a success story for us."

Indian policewomen first arrived in Liberia in 2007, and a fresh batch arrived a few days ago in Monrovia as part of the rotation. Annie Abraham, commander of the outgoing Indian unit, said she is proud of the Indian women's performance.

The message that the Indians brought was clear: You can trust us. And you can do anything a man can do. Even better.

"In a post-conflict society, women are much more traumatized," Abraham said. "They are much more open to us. With men, there is some kind of skepticism."

Not only did Abraham's unit provide security and leadership, it was able to embrace Liberian women, mentoring them in health care and family practices. Many were teenage mothers.

The Indians pioneered a new way of peacekeeping. But sometimes, it was heartbreaking.

"We'd hear a woman say: "I have been raped. My daughter has been raped,'" Abraham said.

All they could do was sympathize and provide the kind of comfort a male counterpart could not.

The problems were new to Abraham, who grew up a tomboy enamored with police regalia. She became a police officer because she didn't want a job that was stereotyped as a woman's.

Ironically, it was her gender that landed her in Liberia.

"We performed duties that were different than men," she said. "It was just the presence of women that made a difference."

They even organized summer camp classes on self-defense and Indian classical dance.

U.S. Secretary of State Hillary Clinton, who visited the Indian peacekeepers in Liberia, said they had motivated Liberian women to take steps to guard against rampant gender violence. "They have set an example that must be repeated in U.N. peacekeeping missions all over the world," she told the U.N. Security Council last year.

The idea of women peacekeepers is fairly new to the United Nations.

Resolution 1325, passed in 2000, recognized that women's experience in armed conflict is different and often more severe than men's. As such, the United Nations vowed to increase the number of women in its peacekeeping forces. Women make up only 8 percent of the U.N. police and 2 percent of its military personnel.

"By including female police among our ranks, we foster a safe environment for victims to get the help they need and deserve," U.N. Secretary-General Ban Ki-moon has said.

Liberia, with a history of sexual violence, was a perfect candidate for women peacekeepers.

Research by human rights group Amnesty International found that many Liberian women do not have access to adequate medical care. They are often widowed or abandoned, and find themselves taking on heavy burdens with little support, few skills and no job or education.

The United Nations' Hutchinson said the world body has made a good start with the Indian female police units -- both for women in Liberia and for promoting gender equality within U.N. agencies.

"We know, for instance, that more numbers of Liberian women are joining the police. We think there is cause and effect," she said about the Indian policewomen.

Change on gender issues in Liberia is slow but gradual, Abraham said. The west African nation has the continent's only female head of state -- Ellen Johnson-Sirleaf -- and a Senate that is now about 17 percent women.

As she headed home last week, Abraham said she felt good knowing that her policewomen had helped inspire Liberian women to stand up on their own. And that she had played a role in turning tears into smiles.