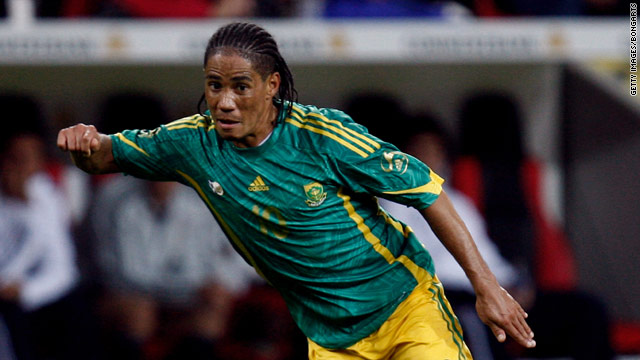 (CNN) -- Steven Pienaar will carry the weight of his country's expectations when he represents South Africa on home turf at this summer's World Cup.

The midfielder was South Africa's Footballer of the Year in 2009 and plays for English Premier League team Everton.

Piennar, 28, tells CNN's Inside Africa about growing up in a tough Johannesburg neighborhood, the responsibilities that go with being a professional footballer, and his hopes for the "Rainbow Nation," and how he doesn't think the World Cup will go to an African team this year.

CNN: You grew up in Westbury -- what kind of neighborhood is it?

Steven Pienaar: It's famous for bad stuff. A lot of burglars and gangsterism -- and poverty.

CNN: What were your options when you were young? What did people want to become at your age at that time?

SP: When you're that age growing up in Westbury you look up to the drug dealers, because they are like your heroes. They drive fancy cars, with nice clothes. So you just want to be like them.

But I had a strict mom and school was the first thing on my mind. She always wanted me to go to school and just focus on school. And soccer was always after school.

CNN: What are your thoughts about the World Cup?

SP: We have to go out there and show the world we're not in the World Cup just because we're hosting it.

We have to show them we've got a spirit, the African spirit, in us and also the talent and the mentality to win games. And we have to go past the group stages.

CNN: What does it mean to play in front of a local crowd?

SP: It's an unbelievable feeling because when you hear the vuvuzela, it's like you're hearing an elephant. You feel that you're in Africa.

It's also the noise of people, the excitement of other people when they sing and dance. It's touching. The game means a lot to them and for us playing for the country. It's a special feeling.

CNN: Do you feel like you're part of the new South Africa?

It can make people put guns down just to come watch a game. That's how special the game is.
--Steven Pienaar
RELATED TOPICS

SP: Yes, I feel I am part of the new South Africa and all that is thanks to [Nelson] Mandela, of course, for changing it. If it wasn't for him, I don't think I would have been given the opportunity.

He's changed a lot, and for me to be a famous football player -- I've got a lot of responsibility and I'm going to represent the country.

CNN: If you didn't have the talent and determination you have, where would you be if you were back in South Africa?

SP: That's a tough one. I'm not sure. I think if I didn't get opportunity to go to a soccer school, I think selling drugs -- something like that.

CNN: Tell me more about the passion of Africans for football. Is it almost a religion?

SP: It is, because the people hate losing. South Africans are a bunch of impatient people ... and it can make people put guns down just to come watch a game. That's how special the game is. I can't describe the way people are crazy about soccer.

CNN: Do you think an African team can win the World Cup?

SP: I'm more of a realist. I don't think it will happen in 2010, but it will be something special if an African nation can win it because it's on the continent.

I think if it was somewhere in West Africa, with the heat, then you could have said an African nation could win. But in South Africa it will be winter, so it will be more in the favor of the Europeans.

CNN: What has football taught you about life?

SP: It can be a roller coaster. I've had a lot of downs in my career but hopefully now it's the turn to go up.

CNN: Do you think African players maybe have more people counting on them than, say, a player from Europe?

SP: Definitely. As African players we know we have a big family back home [and if] one of the kids or cousins make it, you have to look after the whole family.

You have to work for them. And of course, they're praying for you, for the blessings that you get. So you have to help the whole family to get a better life.

CNN: How important is it to the sense of camaraderie that you're representing "the Rainbow Nation"?

SP: It is a rainbow nation and it's a mix of white, mixed race, black players. For us, when we're in camp, we're a family.

There's a lot of jokes. We laugh a lot and there's always happiness in the team. The players are always singing and just having fun. That's what you want: A happy home we hope will bring results.