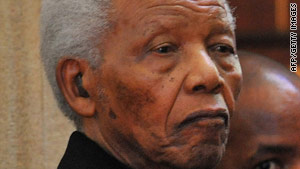 Nelson Mandela attends the funeral of his great-granddaughter at the St Stithian's College Chapel.

Zenani Mandela, 13, was buried in a private ceremony earlier in the day, Mandela's office said, after she was killed in a car crash June 11.

"I should have given you more money, more hugs, more kisses, and I should have whispered more in your ear 'I love you,' " Refiloe Seakemela said, overcome with emotion as she read the mother's statement.

Zenani was returning from the World Cup soccer tournament's kickoff concert when she was killed. Mandela, who did much to bring the tournament to his country, skipped the World Cup kickoff, which came only hours after Zenani died.

Zenani turned 13 two days before she died. Her uncle, Prince Zinhle Dlamini, told mourners that she had met Portuguese soccer star Cristiano Ronaldo on her birthday.

"Ronaldo is here because it's my birthday and he doesn't even know who I am," Dlamini remembered her saying. "My gift from him was a kiss and two signed T-shirts of Real Madrid."

"She was a precious little girl who shined bright for everyone to see," he said, choking up, the foundation said.

Zenani was in a car returning from the show at Orlando Stadium in Soweto when the wreck occurred.

No other vehicle was involved in the wreck, the foundation said.

The driver was arrested for culpable homicide and drunk driving, police told CNN.

Zenani was one of Mandela's nine great-grandchildren. Her great-grandmother Winnie Madikizela-Mandela -- Mandela's ex-wife -- also attended the memorial, as did Mandela's wife Graca Machel, along with other relatives, schoolfriends and teachers.

Mandela, who is 91, has limited his public appearances recently, although he did meet the South Africa soccer squad before the World Cup began.