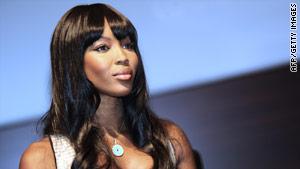 Supermodel Naomi Campbell is being compelled to testify about how she obtained a "blood diamond."
STORY HIGHLIGHTS
RELATED TOPICS

(CNN) -- A war crimes tribunal served a subpoena on supermodel Naomi Campbell Thursday, ordering her to testify in the trial of former Liberian President Charles Taylor.

The court ordered her to appear July 29 to testify or "show good cause why" she cannot.

If she fails to comply she could face a prison term of up to seven years, a fine of about $500, or both, the subpoena says.

Prosecutors asked the court in May to order the supermodel to testify about allegations she got a "blood diamond" from Taylor, and requested permission to reopen their case against him.

The court granted both requests this week.

Taylor faces war crimes charges over a brutal conflict in Sierra Leone which was fueled by rough diamonds, also known as blood diamonds or conflict diamonds.

The prosecution -- which rested in February of last year -- asked to reopen their case specifically in order to call Campbell, as well as actress Mia Farrow and a witness named Carole Taylor, court papers show.

But Campbell and her representatives have refused to answer requests from the prosecution, Andersen said.

Campbell declined through a spokesman to comment on the issue for CNN Wednesday, before the subpoena was served but after it became apparent that it was likely to happen.

The tribunal does not have its own police, so it is not clear what power it has to enforce a subpoena, Andersen said.

"I am hoping that we don't have to find out," he said.

The court notice saying that it will serve the subpoena "respectfully requests the authorities of the state in which Ms. Campbell is residing to assist in the enforcement of this order."

The prosecution says Campbell received rough diamonds from Taylor, and claimed her testimony would prove that the former president "used rough diamonds for personal enrichment and arms purchases," according to papers filed with the U.N.-backed court.

Campbell has said she does not want to be involved in the case, prosecutors said, forcing them to ask the court to issue a subpoena ordering her appearance.

Prosecutors said they learned in June 2009 that Taylor had given the supermodel a diamond in South Africa in 1997. The actress Mia Farrow confirmed it, they said.

Taylor, 62, has been on trial for more than three years. He is accused of fueling a bloody civil war in Sierra Leone that led to widespread murder, rape and mutilation.

Rough diamonds were a key component of that war, both funding it and being used as currency in it.